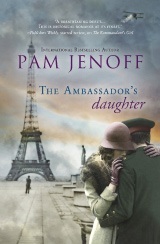 Paris, 1919 The nation’s leaders have gathered to rebuild the world from the ashes of The Great War. But for one woman, the City of Light harbours dark secrets and dangerous liaisons Brought to the peace conference by her German Diplomat father, Margot resents being trapped in Paris where she is still looked upon as the enemy. Yet returning to Berlin means a life with the wounded fiancé she barely knows. Torn between duty and the desire to be free, Margot strikes up unlikely alliances: with Krysia, a musician who protects a secret; and with Georg, the handsome, damaged naval officer who makes Margot question where her true loyalties should lie. Against the backdrop of one of the most significant events of the century, a delicate web of lies obscures the line between the casualties of war and of the heart, making trust a luxury that no one can afford.

Margot is engaged to Stefan who she has known since their schooldays. It was an impulsive engagement and one which she may be regretting. Stefan was about to go to war and Margot accepted his marriage proposal without thinking about the consequences too much. When Stefan returns at the end of the war he is badly injured and Margot is torn between her feelings for Stefan and her desire for independence.

With her father concentrating on the conference, Margot is left to her own devices and is bored. Her ensuing friendship with Krysia, a young Polish musician who has secrets of her own, brings her into contact with some shady characters and the story then leads to blackmail and espionage. Margot finds herself having to make some very difficult decisions, not least because she has met Georg, a young German soldier who is also part of the delegation and brings into question her feelings for Stefan. Margo is helping Georg with some translation work for the conference and finds herself increasingly drawn to him.

This is more than just a romance story and I found it an interesting and compelling read. I didn’t really know much about the Treaty of Versailles and after reading this book, I was interested enough to look into it further. There were occasions when the dialogue seemed out of place for the period but this didn’t affect my overall enjoyment. The atmosphere of post-war Paris was well described and the characters were believable and engaging. There are secrets and twists throughout the book and it was interesting to see Margo’s character mature as the story neared its conclusion.

This was an enjoyable read and I look forward to reading other books by Pam Jenoff on my bookshelf.

My thanks to Newbooks Magazine for the opportuity to read and review this book.