(Also published as ‘The Runaway Wife’) 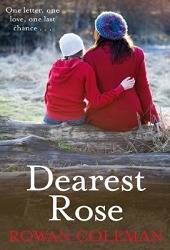 Remembering the letter that says, “You are a remarkable woman and you deserve all the happiness, contentment, and love in the world. I, for one, know that I have never met anyone quite like you,” Rose Pritchard turns up on the doorstep of a B&B in England’s lake district. It is her last resort, as she and her seven-year-old daughter Maddie have left everything behind. They have come to the village of Millthwaite in search of the person who once offered Rose hope.

Almost immediately Rose wonders if she’s made a terrible mistake—if she’s chasing a dream—but she knows in her heart that she cannot go back. She’s been given a second chance—at life, and love—but will she have the courage to take it?

Blending wit, insight, and emotion with a sensitive touch and a warm dose of humor, Rowan Cowan has crafted a poignant novel that will linger with you long after the final page has been turned.

This was my first Rowan Coleman book but certainly won’t be my last. I’m not sure why but I had always perceived her books to be light and fluffy however this book couldn’t be further from that. It’s well written fiction which deals with some deeper issues such as abandonment and domestic abuse.

The book begins when Rose and her young daughter Maddie turn up in the middle of a rainy night at a B&B in the wilds of Cumbria. They are not made particularly welcome by the landlady, Jenny, however her husband takes pity on them and allows them to stay. Little by little we learn of the events that led them to Millthwaite and why Rose has chosen that particular place to escape to.

Fate, love and forgiveness play a huge part in this book. It’s an emotional read at times but it’s also uplifting and there are two lessons to be learnt – one, that you should never give up on your dreams and secondly that there are times when people do deserve a second chance.

There is a well written and believable cast of characters. The main one being Rose. When we first meet her, she is a shell of her real self. She is the product of a dysfunctional family and having spent many years having her spirit crushed has no self-worth. Will she find the strength she needs to protect herself and her daughter? Maddie was an absolute delight to get to know. She is an unusual child, only 7 years old but old beyond her years. She has no social graces and because of her direct manner finds herself friendless most of the time. At first I thought she was on the autistic spectrum but as the book unfolds, we understand more of the reason for her behaviour. Maddie was my favourite character and I thought she was adorable in spite of her unusual ways.

Some other characters who play a big part in Rose’s new life include her best friend Shona, who has her own troubled life to cope with but nevertheless brings humour to the story, the B&B landlady Jenny, whose bark seems to be worse than her bite and Jenny’s son Ted, a flirty young barman with an eye for the ladies who figures in much of the story.

My only one very slight disappointment with the book was towards the end when I found the storyline somewhat rushed and to my mind, partly unexplained, but having said that it was a fabulous read and one that I would definitely recommend. I look forward to reading more by this author.