Before We Met – Lucie Whitehouse 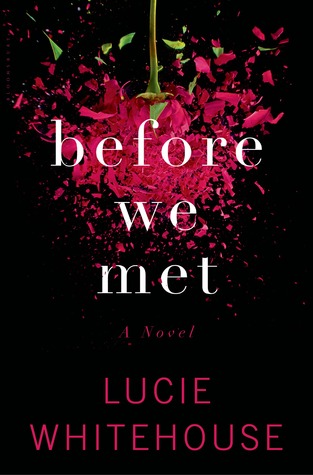 Hannah, independent, headstrong, and determined not to follow in the footsteps of her bitterly divorced mother, has always avoided commitment. But one hot New York summer she meets Mark Reilly, a fellow Brit, and is swept up in a love affair that changes all her ideas about what marriage might mean.

Now, living in their elegant, expensive London townhouse and adored by her fantastically successful husband, she knows she was right to let down her guard.

But when Mark does not return from a business trip to the U.S. and when the hours of waiting for him stretch into days, the foundations of Hannah’s certainty begin to crack. Why do Mark’s colleagues believe he has gone to Paris not America? Why is there no record of him at his hotel? And who is the mysterious woman who has been telephoning him over the last few weeks?

Hannah begins to dig into her husband’s life, uncovering revelations that throw into doubt everything she has ever believed about him. As her investigation leads her away from their fairytale romance into a place of violence and fear she must decide whether the secrets Mark has been keeping are designed to protect him or protect her . . .

I love a twisty, tension filled psychological thriller and this certainly didn’t disappoint. From the moment that newly married Hannah is left waiting at Heathrow for her husband Mark to return from a business trip from New York, the reader is left in no doubt that all is not well. Mark’s initial attempts to explain why he wasn’t on the flight and how he lost his phone don’t entirely convince Hannah, especially when she finds out that his colleagues were expecting him to be somewhere else and she reluctantly starts digging a little deeper into their finances and his business. What she discovers devastates her and although she thought they were both very much in love, she is starting to doubt the man she married. When she questions his friends she discovers discrepancies which make her wonder about his past and the secrets he may be hiding.

Hannah is no pushover, neither is she meek and silly, she is an engaging character with emotions and worries that you could identify with. They were introduced through mutual friends whilst they were both working in New York and she thought she had found her perfect man. She is determined not to be like her mother, who drove her father away with her constant checking and accusations of affairs and has taken a lot on trust. However her discoveries leave her feeling vulnerable and afraid – having given up her NY job when they married to live with Mark in London, she has no resources of her own and her initial fears that Mark is having an affair and planning to leave her feel very real.

There were so many twists and turns in the story that it was difficult to decide between the lies and the truth. As the story progresses the tension builds and it takes a sinister turn. There were times when I was so concerned as to the danger that Hannah could be walking into that I was almost too scared to read on.

I’ve read and enjoyed both of Lucie Whitehouse’s previous books The House at Midnight and The Bed I Made but this superbly crafted novel takes her writing to another level of suspense and I loved it!

My thanks to Netgalley and Bloomsbury Publishing for the digital copy for review.

4 thoughts on “Before We Met – Lucie Whitehouse”