The Book of You – Claire Kendal 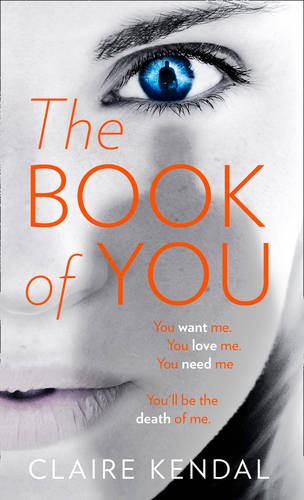 To be published on 24 April 2014 by Harper Collins

A mesmerizing tale of psychological suspense about a woman who must fight to escape an expert manipulator determined to possess her, Claire Kendal’s debut novel is a sophisticated and disturbing portrait of compulsion, control, and terror that will appeal to fans of Before I Go to Sleep, The Silent Wife, and Into the Darkest Corner.

His name is Rafe, and he is everywhere Clarissa turns. At the university where she works. Her favorite sewing shop. The train station. Outside her apartment. His messages choke her voice mail; his gifts litter her mailbox. Since that one regrettable night, his obsession with her has grown, becoming more terrifying with each passing day. And as Rafe has made clear, he will never let her go.

Clarissa’s only escape from this harrowing nightmare is inside a courtroom–where she is a juror on a trial involving a victim whose experiences eerily parallel her own. There she finds some peace and even makes new friends, including an attractive widower named Robert, whose caring attentions make her feel desired and safe. But as a disturbingly violent crime unfolds in the courtroom, Clarissa realizes that to survive she must expose Rafe herself. Conceiving a plan, she begins collecting the evidence of Rafe’s madness to use against him–a record of terror that will force her to relive every excruciating moment she desperately wants to forget. Proof that will reveal the twisted, macabre fairy tale that Rafe has spun around them . . . with an ending more horrifying than her darkest fears.

Masterfully constructed, filled with exquisite tension and a pervasive sense of menace, The Book of You explores the lines between love and compulsion, fantasy and reality, and offers a heart-stopping portrait of a woman determined to survive. Claire Kendal’s extraordinary debut will haunt readers long after it reaches its terrifying, breathtaking conclusion.

This debut novel from Claire Kendal was a truly disturbing and chilling read.

Rafe Solmes is an obsessive and a master at manipulation. He will not let Clarissa escape from him. She bitterly regrets the one night stand with him and doesn’t ever want him near her again however Rafe has other plans and will stop at nothing to get what he wants. As the harassment and mental torment increases and the level of cruelty ultimately goes to another level, Clarissa has to do all she can to keep safe. She keeps a journal detailing his harassment of her and keeps his gifts and letters hidden away until she considers she has enough evidence to go to the police.

This is a first person account of the harassment by Rafe as recorded in her journal interspersed with a third person narrative of Clarissa’s daily activity. This style of writing does take a bit of getting used to, although the font changes to show the difference in narrative. Initially the timeline does skip back and forth but once I got into the story this didn’t bother me at all.

Clarissa is called to do jury service and it turns out the trial she is attending is that of a young girl, the victim of a violent abduction. This is not a random act; the young girl does have a history however the ordeal that she faces in court by the men’s barristers chills Clarissa and it seems to her that the girl is the one on trial and not the gang. She sees similarities in the girl’s ordeal to that she is experiencing. The only thing keeping her sane is her growing friendship with Robert, another juror. However Rafe has seen and is not happy that Clarissa is enjoying the company of another man.

Having had my own experience of stalking several years ago, although not to this extent, the writing really resonated with me. The sense of fear, the anger and the frustration of having this uninvited and unwanted person in your life was superbly crafted. Each time Clarissa rejected Rafe you could sense his anger and cruelty increase and I was on tenterhooks wondering what his next move would be. Clarissa wasn’t perfect, she had a flawed personality and I disagreed with some her actions but she didn’t deserve the attentions of Rafe, who to me seemed totally unhinged. It’s to the author’s credit that she can create characters who really get under your skin.

For me, the story did seem to slow down a little in the middle but it soon picked up pace again and led to a conclusion that I certainly wasn’t expecting.

One of my favourite genres is the psychological thriller and this one doesn’t disappoint. It’s an excellent debut novel and one that I would recommend to fans of this genre.

I received my paperback copy through the Amazon Vine review programme.

Claire Kendal was born in America and educated in England, where she has spent all of her adult life. The Book of You is her first novel. It will be translated into over a dozen languages. Claire teaches English Literature and Creative Writing, and lives in the South West with her family. She is working on her next psychological thriller.

1 thought on “The Book of You – Claire Kendal”