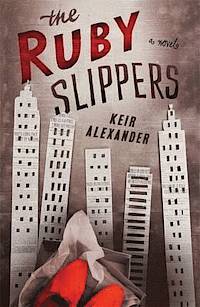 To be published in March 2014 by Corsair/Constable & Robinson

Old Rosa the bag lady shuffles along the streets of New York, stinking, silent and shunned by man and beast. Time and again her nephew, Michael Marcinkus the grocer, has tried to help – but Rosa remains unknowable, hushed inside her hulk. On the day of the St Patrick’s Day Parade, Rosa is in a terrible accident. As she lies in a coma, Mr Marcinkus visits her squalid flat and unearths something remarkable from the monstrous piles of junk: two glittering pieces of Hollywood history. How on earth does decrepit old Rosa come to own such treasure? And what is to be done with them now? Word of Rosa’s ‘Ruby Millions’ soon gets out, and these old articles of faith become an irresistible beacon for the misplaced hopes and darkest desires of an unforgettable cast of characters. Could a pair of priceless slippers really bring some magic into to a mundane life? Would an unexpected windfall bring a hope of happiness? Lives are changed, relationships tested and real values challenged. But in the hunger to possess the prize, will anyone stop to learn the incredible story of the woman to whom they once belonged? The Ruby Slippers is a rare and moving story about the search for meaning, and the meaning of value.

“She stinks. It has to be said. Stinks to high heaven”. This is our introduction to Rosa, the old bag lady who walks the streets with her dog Barrell who stays with her when no human will. Her nephew and only relative, Michael Marcinkus is called to her hospital bed after she is involved in an accident during the Parade. When he and his wife Grace go to her apartment they are disgusted by the squalor and filth that she lives in. Nothing has ever been thrown away, not even rotten food. However in amongst the filth and stench they find a box containing a pair of ruby slippers. Gradually we are told of Rosa’s story and how she acquired such beautiful items.

We meet a cast of characters who appear to be completely random – a troublesome teenage boy, a 14 year old girl who feels abandoned by her father, a rich, sick and bitter old man raging against life and a man keeping a vigil at his dying lover’s hospital bedside. All have their own voices and their own part to play in the story of Rosa’s slippers.

This is an extremely well written debut novel but I have to admit to feeling disappointment that it didn’t quite live up to its promise. For me, there was a lack of engagement or connection with the characters and at times I felt it was over-written. The story travels from Latvia from the start of WWII to America with the tragedy of war movingly portrayed. I would have liked to have known more about Rosa’s history and I felt that she wasn’t given the prominence in the story that she deserved.

Greed, loss, family secrets and regrets are just some of the facets of this story. There were many parts of the book that I enjoyed however sadly it won’t be a memorable read for me.

The book will be available through Lovereading and other booksellers in March 2014.

Keir Alexander was once an actor and stage manager before working in film as a writer and director. He is now an English teacher living in Sussex where he plays cricket as often as he can. The Ruby Slippers is his first novel.