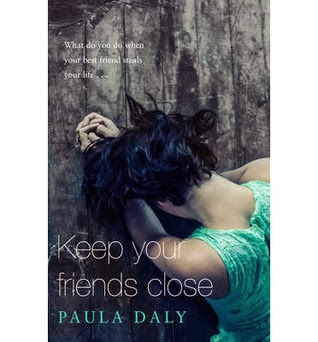 What do you do when your best friend steals your life?

Natty and Sean Wainwright are happily married. Rock solid in fact. So when Natty’s oldest friend, Eve Dalladay, appears – just as their daughter collapses on a school trip in France – Natty has no qualms about leaving Eve with Sean to help out at home.

Two weeks later and Natty finds Eve has slotted into family life too well. Natty’s husband has fallen in love with Eve. He’s sorry, he tells her, but their marriage is over.

With no option but to put a brave face on things for the sake of the children, Natty embarks on building a new life for herself.

And then she receives the note.

Eve has done this before, more than once, and with fatal consequences…

Having loved Paula Daly’s debut novel Just What Kind of Mother Are You (reviewed here), I was really looking forward to reading her latest book and I certainly wasn’t disappointed.

It’s the stuff that nightmares are made of –  Natty is married to Sean, she thinks they are happy enough but looking after two teenage girls whilst running a hotel business with her husband takes all her time and energy and she has been too busy to notice that he is not quite as happy.  In fact he is feeling quite unloved and when Eve Dalladay, a very glamorous long-time friend of Natty’s from their university days suddenly arrives and takes advantage of the situation during a family crisis, Natty faces losing everything – her husband, her children, her home and business.

This was a wonderful gripping story, it took me less than two days to read and I couldn’t go to sleep until I came to the end.  With such superb and realistic characterisation, this could be a family that you know.  Natty wasn’t an easy character to like at first and certainly wouldn’t have been an easy person to live with but all she was doing was trying to provide a secure future for her family.   She doesn’t do herself any favours by some of her actions and really she was asking for trouble but then I guess sense and reason go out of the window if your world had been stolen from you by someone you considered to be your oldest friend.

There are no words for Sean – apart from weak, spineless, coward – I’m being polite here!  However the real villain is Eve.    She was pure evil.   Manipulative, calculating and a compulsive liar, she knew exactly which buttons to press to get what she wanted.  If this had been a pantomime I would have been booing every time she appeared.  What I particularly loved about the story was the way it was constructed.  From the outset the reader knows what is happening but is just waiting for everyone else to catch up.  All the way through I was willing Natty to find a way to bring Eve down; the transformation of Natty from an absolute wreck to a woman fighting for her family was beautifully written.

It was great to see DC Joanne Aspinall make a return from JWKOMAY; she, together with her “mad Aunt Jackie”, are wonderful characters and with each book their roles become an increasingly important part of the story.

There is everything in this story – it’s a chilling psychological thriller with family secrets, murder and fabulously flawed characters and I can’t recommend it highly enough.  After two tremendous books, I can’t wait to see what the author comes up with next …… no pressure Paula!

I will mention here that a short story Kindle ebook No Remorse by Paula Daly is currently available on Amazon for 99p.  I have read and enjoyed this one too.

Paula Daly was born in Lancashire. Before beginning her first novel Just What Kind of Mother Are You? she was a self-employed physiotherapist. She lives in the Lake District with her husband, three children and whippet Skippy.