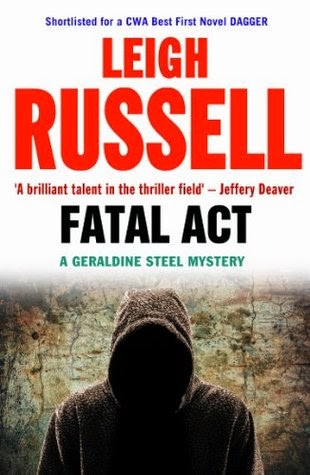 A glamorous young TV soap star dies in a car crash. Returning for her sixth case, Detective Inspector Geraldine Steel is baffled as the driver of the second vehicle miraculously survives – and vanishes. Another young actress is murdered and, once again, the killer mysteriously disappears. Geraldine unwittingly risks her sergeant’s life in their struggle to track down a serial killer who leaves no clues.

I had a dilemma when I received Fatal Act for review from Real Readers. This is the sixth book in the series and I had previously purchased the earlier five books for my Kindle but hadn’t yet got round to reading them. Rather than delay the review of this until I had read the other 5, I decided to just jump in, knowing that I would no doubt be missing a back story. Actually, it didn’t really matter at all that I hadn’t read the previous stories – this can be read as a standalone.

This story begins when Anna Porter, a young actress, is found dead in her Porsche after an apparent collision with a van, however there is no sign of the other driver who has simply vanished.  What is initially thought to be a routine traffic accident turns into a suspected murder after further investigations reveal some disturbing facts.  When another young actress is later found dead, also in suspicious circumstances, DI Geraldine Steel and her team find themselves looking for a killer who doesn’t leave any clues behind and leaves them struggling to find a suspect.

This is a competently written police procedural mystery.  The short chapters make it an easy read and certainly for the first and the final parts of the story, the tension and pace is there.  Geraldine seems to be a complicated character; she is good at her job and often acts on instinct even if it means going against her superiors but she is difficult to get to know; she appears to be a loner who prefers to keep her distance.  This may well be explained in her history which I have yet to discover.

Although I enjoyed the book, I wasn’t wholly convinced by the professional relationship between Geraldine and her female sergeant Sam Haley. Sam’s attitude seemed a little unrealistic – would a sergeant really behave in such an offhand and sometimes disrespectful manner with their DI?

The plot was cleverly constructed although I did correctly guess the identity of the killer part way through.  The book kept my interest even when the story did start to flag a little in the middle but it picked up pace again towards the end.   I will get round to reading the previous books in the series and hopefully all will become clear concerning Geraldine’s history and character.

My thanks to Real Readers for the paperback copy to review.

Leigh Russell studied at the University of Kent gaining a Masters degree in English and American literature. A secondary school teacher, specialising in supporting pupils with Specific Learning Difficulties as well as teaching English, Leigh Russell is married with two daughters and lives in Hertfordshire. Her first novel, Cut Short, was published in 2009, followed by Road Closed in 2010, Dead End in 2011 and Death Bed in 2012. Stop Dead, the fifth novel to feature DI Geraldine Steel was published in May 2013. The series has received glowing reviews and been a hit with readers around the world.