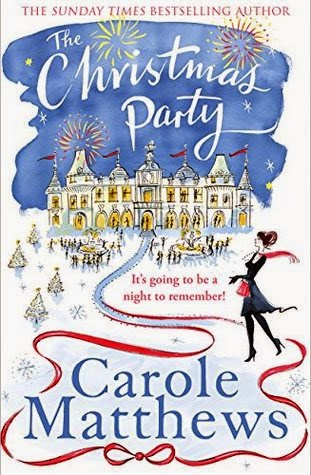 Louise Young is a devoted single mother whose only priority is providing for her daughter, Mia. Louise has a good job in a huge international corporation and she’s grateful for it. The only problem is her boss who can’t keep his hands to himself, but Louise can handle him. What she really doesn’t have time for is romance – until she meets the company’s rising star, Josh Wallace.

Louise usually says no to evenings out but she’s decided to let her hair down tonight. It’s the office Christmas party, she has a pretty dress to wear and she’s looking forward to some champagne and fun. She’s completely unaware that others around her are too busy playing dangerous games to enjoy the party – until she’s pulled into those games herself . . .

It does seem incredible that this is Carole Matthews’ 25th book.  I don’t know how she does it, but she manages to keep the storylines fresh and in recent books, has come up with something a little different – perhaps just a little bit darker than the somewhat lighter reads of old.  I’m not complaining though, I’ve read every one so far and intend to carry on doing so….

Single mother Louise Young is the newest member of staff at Fossil Oil and, after struggling financially after her ex left her in debt, and with a young daughter Mia to look after, she is delighted with her new job as a PA. The only fly in the ointment is her boss Tyler Benson; he can’t keep his hands to himself and Louise constantly has to fend off his unwanted advances.  It’s nearly time for the Fossil Oil Christmas party and although Louise would normally rather stay in with Mia, she decides to dress up and enjoy herself for once.  Her only worry is Tyler – would he ruin her evening and ultimately cost her the job she so desperately wants to keep.

The story of the Christmas Party is set over a period of just a couple of days, the day of the party itself, and Christmas Day.  The book is over 400 pages and unusually most of it is devoted to the night of the party. Don’t make the mistake of thinking that this could slow it down – there is so much drama taking place between all the various characters that the story fires along and before you know it, the party is over and you’re at the end getting your coat.

There is a stark lifestyle contrast between Louise and the wives of the Fossil Oil executives Melissa (married to big boss Lance) and Kirsten (married to the lecherous Tyler).  Louise is back living with her parents because money is tight and she has Mia to support but she generally has a positive attitude to life, whereas the corporate wives have more money than they can spend but are so unhappy and discontented.  As with many big corporate companies, Fossil Oil has taken over their lives – and their husbands.  They pay big bucks but in return expect your soul.

For most of the Fossil staff, the Christmas party, (held in a beautiful manor house), was an excuse for some raucous drunken behaviour at the firm’s expense but for others it was time for reflection and the catalyst for some life changing decisions.  Whether you love or dislike some of the characters, they are all expertly drawn and although I had some sympathy for some, I was so wishing throughout that certain ones would get their comeuppance.

I’ve always loved Carole’s books and although this isn’t quite the usual warm and cosy Christmas read that I’ve come to expect, it was very enjoyable and entertaining; with a mixture of serious and funny and, of course, a touch of romance.  It does make me thankful that my firm’s office parties are more sedate affairs!  There was only one small thing that could have made this better for me, a couple of components of the ending seemed incomplete and I would have liked these finished off with perhaps an epilogue, just to tie up the endings.  However this didn’t spoil my enjoyment and I now look forward to book number 26.

My thanks to Victoria at Little, Brown for the copy to review.

At the time of posting, The Christmas Party is available on Kindle from Amazon for just £1.19