The Life I Left Behind – Colette McBeth 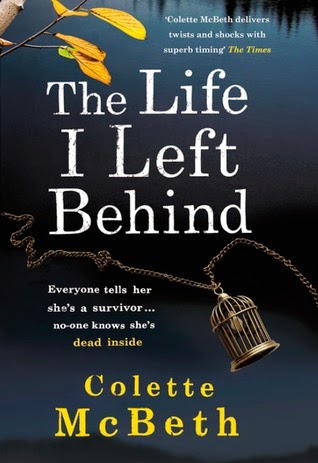 I’m the only one who knows the secrets her friends have hidden, the mistakes the police have made.

I’m the only one who can warn her she’s still in danger.

I know exactly who attacked her.
He’s the same man who killed me.

“If she had died in the attack she would have died once, but she has been dying every day since then, a slow, painful disintegration of her mind”.

I still have Colette’s debut ‘Precious Thing’ waiting on my bookshelf to be read but when given the opportunity to read and review this, her second novel, I wanted it immediately!

It sounded so intriguing, a story narrated by a murder victim. Whilst reading reviews for this, I’ve seen many references made to The Lovely Bones by Alice Sebold. I must be one of the few people in the world who really didn’t like that book so I was hoping that this wouldn’t be a disappointment. I needn’t have worried. Eve, the murder victim, who is one of 3 narrators is not a wishy-washy character of the afterworld. Her voice is clear and believable and I felt quite sad that she was dead as she was a character that I would have loved to have known more about.

Eve’s murder has a very similar MO to that of Melody’s attack, 6 years previously. Melody was left in a coma and although she has physically recovered, mentally she is still a mess. A friend and neighbour was found guilty of her attack but has since been released from prison. Has the same person committed another crime?

Investigating Eve’s murder is DI Victoria Rutter. Rutter was a member of the original team investigating Melody’s attack but whilst delving into Eve’s case; she begins to have doubts about the way Melody’s investigation was carried out.

The three narrations of Eve, Melody and DI Rutter worked very well together. With alternating chapters you get to know the main characters well and even the more minor parts are fleshed out enough to enable you to form an opinion about them. I was pretty sure that I had worked it all out but with each chapter, another clue (or red herring) – you will have to make up your own mind, put doubts into my mind.

The two crimes are a significant part of the story but so is Melody’s traumatised mind. She knows that she can’t be a victim forever but doesn’t know to make herself feel safe again. Although I didn’t particularly like her character, I was hoping that she would find the strength to help find Eve’s killer and be able to lay her own ghosts to rest.


This was a fabulously twisty thriller that worked so well, despite the unusual narration.  It had a well written storyline, tension and pace and I really didn’t want to put it down. A definite 5* read for me

Colette McBeth was a BBC TV News Correspondent for ten years. She lives in West London with her husband and three young children. She attended the Faber Academy Novel Writing Course in 2011. Her first novel, Precious Thing, was published in 2013.