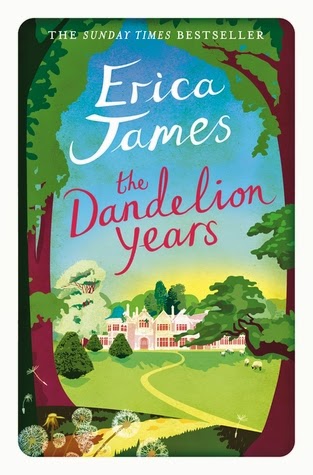 Ashcombe was the most beautiful house Saskia had ever seen as a little girl. A rambling pink cottage on the edge of the Suffolk village of Melbury Green, its enchanting garden provided a fairy-tale playground of seclusion, a perfect sanctuary to hide from the tragedy which shattered her childhood.

Now an adult, Saskia is still living at Ashcombe and as a book restorer devotes her days tending to the broken, battered books that find their way to her, daydreaming about the people who had once turned their pages. When she discovers a notebook carefully concealed in an old Bible – and realising someone has gone to a great deal of trouble to hide a story of their own – Saskia finds herself drawn into a heart-rending tale of wartime love…

Erica James is another of my all-time favourite authors. I loved her previous book (Summer at the Lake, reviewed here last year) and this, her 19th novel, is in my opinion, even better.

This is a dual time story, set in the current day and also during 1943/44. The story begins with Saskia Granger, 32 years old and living with her father Ralph and two grandfathers Oliver and Harvey in an idyllic sounding Suffolk cottage, following a family tragedy many years before. Both Saskia and her father love old books – her father sells them and Saskia restores them.  An old bible comes into her hands which contains a notebook – the story told in this notebook is an incredibly moving account of the difficulties and hardship sustained of a love affair conducted during the war.

This leads very nicely into Jacob’s story. Jacob Belinsky was part Russian/part British, whose Russian family had settled into London with their barber/hairdressing business. Jacob did not want to join the family business, his talents lay elsewhere and his academic background led to him being employed at Bletchley Park as a cryptanalyst. He was entrusted with top secret work deciphering German messages. It was because of Bletchley Park that he met Kitty – and it is their story, given the title of ‘The Dandelion Years’ by Jacob, that runs alongside that of Saskia and her family.

There is another intriguing character heavily involved in the story. A young man, Matthew Gray. He is mourning the recent loss of his mentor and the only father figure he has ever known.

I know it’s very early but this could possibly be a contender for my book of the year. The main characters were just wonderful and I felt an engagement with every single one. I chuckled at the good natured and gentle bickering between the two grandfathers or at Jacob’s dealings with his vile landlady; I could fully understand Saskia’s desire to stay with the familiar life that she loves rather than to embrace change and I was intrigued by the complex characters of both Jacob and Matthew.

Unusually both timelines worked extremely well for me and I was equally happy to spend time with Saskia and her family as I was with Jacob and Kitty. I found the Bletchley Park connection very interesting, so much so that it is on my list of places to visit this year.

There were times when the story tore at my heart and made me gasp out loud, however I can forgive you Erica for almost making me cry! This is a truly wonderful story of families and love and why we need to take a risk in life sometimes.

My thanks to Gaby at Orion who kindly sent a paperback copy for review. 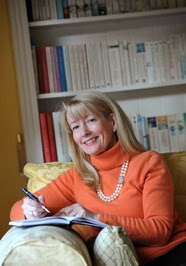 With an insatiable appetite for other people’s business, Erica James will readily strike up conversation with strangers in the hope of unearthing a useful gem for her writing. She finds it the best way to write authentic characters for her novels, although her two grown-up sons claim they will never recover from a childhood spent in a perpetual state of embarrassment at their mother’s compulsion.

Erica now divides her time between Cheshire and Lake Como in Italy, where she now strikes up conversation with unsuspecting Italians.