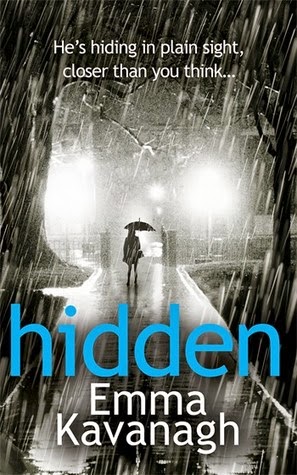 HE’S WATCHING
A gunman is stalking the wards of a local hospital. He’s unidentified and dangerous, and has to be located. Urgently.

Police Firearms Officer Aden McCarthy is tasked with tracking him down. Still troubled by the shooting of a schoolboy, Aden is determined to make amends by finding the gunman – before it’s too late.

SHE’S WAITING
To psychologist Imogen, hospital should be a place of healing and safety – both for her, and her young niece who’s been recently admitted. She’s heard about the gunman, but he has little to do with her. Or has he?

As time ticks down, no one knows who the gunman’s next target will be. But he’s there. Hiding in plain sight. Far closer than anyone thinks…

The story begins with a shooting spree by a lone gunman at a hospital. A witness to the carnage is Charlie, a reporter with a local paper. We see from her eyes the victims, some of whom she knows. These names don’t mean anything to us – yet, but the timeline to the story then goes back, counting down to detail events over the preceding 6 day period and culminating on the day of the shooting. This does tend to jump around and attention is needed to the timeline heading for each chapter to avoid confusion. Written from multiple viewpoints – Charlie, the journalist; Aden, a police fire arms officer; Imogen, a hospital psychologist and the shooter himself – the voice of Charlie and the shooter are told in the first person, the other characters in third. I know that some don’t like the switching of tenses of POV but this doesn’t bother me at all.

I’m not usually a fan of stories that begin with the end as I lose that element of surprise but in this case, the author has made it work very well. The dramatic start will get you hooked and by going back in time, we get to know the backstory to various characters, including the shooter. Although there can be no excuse for such a savage act, we get to see his mindset as he prepares for his murderous mission.

Running through the story, is a strand concerning the death of a young nurse, Emily. Emily’s body was found on the M4, apparently the drunken victim of a road accident. Although Emily and Charlie used to be close friends, they had drifted apart but Charlie is concerned that her death is somehow connected to reports of a gunman having been seen at the hospital (this is prior to the shooting) and uses her investigative skills to find out the truth. She is not convinced that Emily’s death was merely an accident but struggles to convince others.

This is a complex character driven story and the author has used her experience as a police and military psychologist to show how police officers involved in life or death situations can struggle to deal with the aftermath of their actions and how such tragedies affect them. Writing about what she knows makes these characters realistic and believable.

Once or twice I thought I had guessed who the shooter was from the little hints that were weaved in at various times. I was however completely wrong and I realised later that I should have been paying more attention. Whilst Charlie was my favourite character (she’s feisty who acts on her gut instinct), all the main characters were realistic and well-drawn.

This is the second novel by Emma Kavanagh that I’ve read (I reviewed her debut ‘Falling’ here last year). Both books are extremely well written but this latest one just has the edge for me. Hidden is a well plotted and tense thriller written with authority and attention to detail. It’s not a fast paced action thriller but for those interested in the human psyche then this is definitely recommended.

Emma Kavanagh was born and raised in South Wales. After graduating with a PhD in Psychology from Cardiff University, she spent many years working as a police and military psychologist, training firearms officers, command staff and military personnel throughout the UK and Europe. Now she is lucky enough to be able to write for a living. She lives in South Wales with her husband and young son.