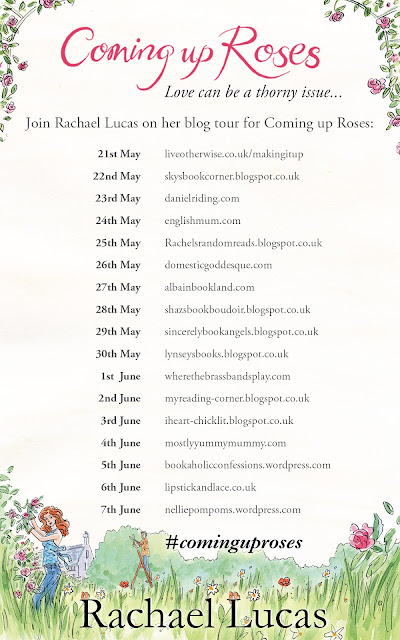 Coming up Roses is published by Pan, with both Kindle and paperback published on 21 May 2015.

I’m delighted to be taking my turn today on the Coming Up Roses blog tour. Please do check out the other stops listed.

The publisher has kindly offered 2 paperback copies of the book for a giveaway (UK only).  They will send the books directly to the two winners.  To enter, please see the Rafflecopter box below. 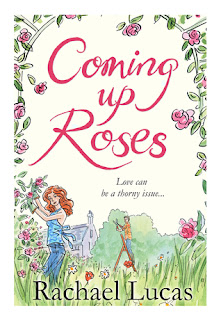 Would-be gardener Daisy can’t believe her luck when her parents announce they’re off on a midlife crisis gap year, leaving her in charge of their gorgeous garden. After a turbulent few months, a spot of quiet in the countryside is just what she needs.

A shoulder to cry on wouldn’t go amiss either – so when Daisy comes across Elaine and Jo, she breathes a sigh of relief. But her new friends are dealing with dramas of their own…

As Daisy wrestles the garden into something resembling order, her feelings for handsome Irishman George begin to take root. Daisy’s heart’s desire − her parent’s garden − is under threat, and Daisy’s forced to confront nosey neighbours and fight greedy developers. Village life is turning out to be far from peaceful.

Daisy, our main character, is house sitting her parent’s house, Orchard Villa, whilst they are away on an extended holiday (and also looking after Polly the elderly retriever). She has recently suffered turmoil in her own life and has nowhere else to go; she is glad of the chance for some solitude to re-assess her life and has no intention of making friends or becoming involved in village life.

Having completed a horticultural course, she is keen to make a career from gardening and is looking forward to the chance to get her parent’s vast overgrown garden into shape. Unexpected help is provided by an elderly widower, Thomas, who was responsible for many of the gardens in the village, and still has the notebooks from many years before when he looked after the garden at Orchard Villa for the previous owners. Thomas was a wonderful character, he was not above a bit of harmless mischief making and matchmaking but his wise words were a comfort to Daisy at some particularly trying moments.

Thomas is not the only friend that Daisy makes. After an incident with a hosepipe, she becomes firm friends with Elaine, the wife of a local headmaster. Elaine appears to have the perfect life, she lives in a beautiful house, is married to a handsome and successful man; she doesn’t have to work but spends her time creating visions of the perfect lifestyle for her on-line blog. However appearances can be deceptive and along with another new friend Jo, a single mother of a bolshy teenager, Daisy discovers that everyone has their problems.  One of the aspects that worked so well were the supportive friendships that were formed.

The village of Steeple St John plays a huge part in this story and really is a character in its own right. Daisy is reluctantly press ganged into taking part in village events by the formidable Flora, chair of the Parish Council and events such as the Garden Open Days and the Village Fete just add to that old fashioned feel and I was reminded of the gentleness of St Mary Mead, created by Agatha Christie. Although there are no murders or mysteries here, the cosy and safe feel of the village gave the impression of a bygone age where everyone knows everyone else’s business. However don’t be misled, this is very much a contemporary tale, with very modern problems – with just one such issue being developers buying up beautiful old houses and gardens to create large housing developments against the villager’s wishes.

There is of course romance along the way but moreover this is a story of friendship. The characters were so vividly drawn and realistic that you couldn’t help but be drawn into their lives. Daisy was such a likeable person and I was rooting for her all the way.  For me, one of the stars of the story was not a human character but a canine one – Polly the retriever. I could readily relate to Polly’s long suffering expressions and doleful eyes seeking either food or walks.

This was the first book I had read by Rachael Lucas but it won’t be the last. With a cast of eclectic but charming characters together with vivid descriptions of gorgeous gardens I just loved this gentle, humorous and beautifully written story and will definitely be putting Rachael’s books on my reading list in future.

My thanks to Lucie at Pan Macmillan for the advance reading copy. Lucie was also kind enough to help me out with an emailed copy when I stupidly left the copy I was reading on the train.  I hope whoever picked it up enjoys it as much as I did! 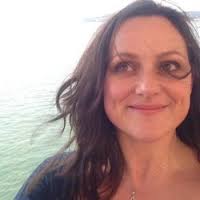 Rachael juggles working as an author, coach and freelance writer with the aid of quite a lot of tea.

She and her partner (also a writer) live by the seaside in the North West of England with their six children.

For more from Rachael, visit her websites at rachaellucas.com and writeforjoy.net

You can find her on Twitter @Karamina and at Facebook.com/RachaelLucasWriter