Guest Post by Anne Allen, author of The Guernsey Novels: “My heart belongs to…”

I’m delighted to welcome Anne Allen to My Reading Corner.   Anne is the author of four novels set on the beautiful island of Guernsey.  I’ve read and enjoyed Finding Mother (reviewed here last year) and have the remaining three to look forward to.

Anne’s fourth novel, The Family Divided, was published in June 2015 and is available in paperback, and e-book for Kindle.

Anne has written a lovely post about her love of Guernsey, I hope you enjoy. 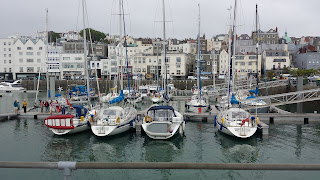 Readers, I fell in love at first sight. Marriage was not an option as the object of my love was an island, the second largest of the Channel Islands – Guernsey. I didn’t know it then, but it was to loom large in my life from that day on. It was August 1997. Do you believe in serendipity? I do, as my life has been full of such events and this was probably the most life-changing moment of all. A few months previously I had met some wonderful ladies on a self-awareness course in Glastonbury (where else?) and we had formed an instant connection. Two of them were sisters and had children of a similar age to my three and they kindly invited us over to stay with them in Guernsey that fateful August (I had been widowed a few years earlier).

At the time I had just moved from Rugby to Teignmouth to be by the sea, but falling in love with Guernsey – and the islanders – caused me to re-think my long-term plans. Among my new friends were complementary therapists like myself (I was a psychotherapist and hypnotherapist) and I began to dream of setting up a residential natural healing centre in Guernsey. Well, a year later I had sold my house in Teignmouth and thought I’d bought a small guest-house in St Peter Port. Suffice to say the deal fell through shortly after the four of us arrived in my laden car, all our furniture etc en route to storage. I was devastated, but looking back I can see it was just as well, for at the time interest rates were sky high and I would not have survived financially. 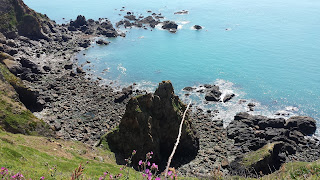 Instead I set up my psychotherapy practice and clients trickled in while we moved from one rental to another. Guernsey has an unusual two-tier housing system, which meant I could only live Open Market, in more expensive housing. In spite of this I was happy to be in the island, building up friends and clients and exploring all the gorgeous beaches and stunning cliff paths. The way of life was so different to anything I had previously experienced: a mix of great watering-holes and restaurants and a laid-back approach to daily life. The gentle pace suited me and, although I knew I could never afford to buy a property, I was determined to hang on and build up my practice. 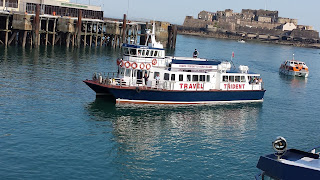 One friend had a boat and we would go out for fun trips with our children, mooring up in one of the lovely south coast bays. The boys would jump into the sea and splash around while us girls lay decorously on deck to top up our tans. What was not to like? It was idyllic. Guernsey was considered so safe that people didn’t bother locking their houses or cars!


The small sister island of Herm is my favourite place ever. It’s tiny – about a mile by a mile and a half – and there are no cars or bikes. You can walk around the dirt lanes in peace and safety, making it a great place for families. I took my children camping there one year and we had a wonderful time. There’s nothing to beat barbecuing on the beach on a warm summer’s evening☺ 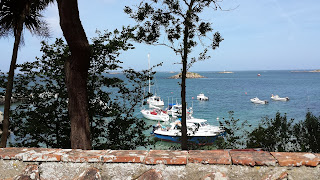 A few years later I met someone and we lived together in a beautiful farmhouse on the west coast in Perelle; a happy time. In the garden was a German bunker which my partner had renovated and is featured in my first novel, Dangerous Waters. Previously I had lived in various parts of Guernsey and try to incorporate them into my books. I’m often told by readers with a local connection that they recognise my descriptions. I strive to be accurate as there’s an island full of people who could rise up and shoot me down in flames if I make a mistake!

Guernsey has an interesting, but poignant, history. The German Occupation of WWII has left an indelible mark on the psyche of the islanders, even those who were not born then. Liberation Day, May 9th, is celebrated every year, and this year was the 70th anniversary, marked with more events than usual. Thousands of children were evacuated in 1940, shortly before the Germans arrived, and their lives were changed forever. Some never returned, having settled in England, causing upset to the families on the island. All my books have a reference to this period in honour of the impact it has had. 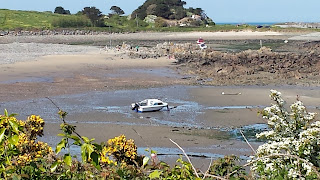 I wrote Dangerous Waters in homage to Guernsey and the wonderful times I had there. Although it’s not possible for me to return to live, I visit frequently. Not only does my elder son live there, but I love to catch up with friends and undertake research for my books. Now, if I were to come into a fortune – perhaps a lottery win or a best-seller?! – I could buy a small pied-a-terre and fly over once a month. Bliss! 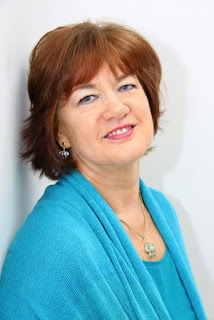 Anne’s a late-comer to writing, having only started in her, ahem, middle years, (assuming everyone will live to 100 from now on, yes?). She often had the ‘itch’ to write but was focussed on her career as a psychotherapist and bringing up three children on her own. Then some years ago she was a reluctant entrant (pushed by her mother!) into a writing competition run by Prima magazine. They wanted a True- Life story and she won the first prize of £500 ☺ Deciding that writing wasn’t such a bad idea, she wrote her first novel, Dangerous Waters, a romantic mystery and eventually published it in 2012. Now retired as a therapist, she has devoted more time to writing, and has since published three more books, all forming The Guernsey Novels – a series of stand-alone stories with links to earlier ones. They are Finding Mother, Guernsey Retreat and The Family Divided.


A restless soul, she’s moved around quite a bit, as far south to Guernsey and then Spain, learning that the sea is part of her soul. She now lives in Devon to be near her daughter and grandchildren. Happiest in warmer climes, her ideal would be to spend part of the English winter somewhere warm, possibly Spain, to recharge body and soul. And to make more frequent visits to her beloved Guernsey. So, if and when she writes that bestseller…!

You can find out more from Anne’s website  http://www.anneallen.co.uk

5 thoughts on “Guest Post by Anne Allen, author of The Guernsey Novels: “My heart belongs to…””