All That Glitters – Vicky Pattison 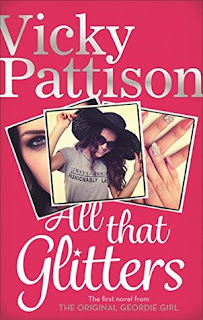 Three years ago Issy Jones walked away from her dream because her family needed her. Today, she spends her days working in her mum’s salon and her nights going out with her best friend, Molly. Life is good yet Issy can’t help wishing for something more.


When Issy’s dad puts her forward for a sensational new reality TV show, no one expects her to actually be selected. With her family urging her to grab the opportunity with both hands, Issy suddenly finds herself surrounded by glamour, fame and celebrities. Full of excitement, Issy embraces it all – it’s what she needs to do to achieve her goals. But when the reality of what she’s signed up for doesn’t match the dream Issy is chasing, things begin to fall apart. Issy is so close to getting everything she ever wanted – but just how much of herself will she have to sacrifice to get it?


Bold, thrilling and romantic, Vicky Pattison’s first ever novel is a rollercoaster ride full of glitz, warmth and drama. It’s a must-read for fans everywhere!

This isn’t my normal type of read and when I received this for review my heart did sink just a little, as I am clearly not the intended targeted age group for this story. I’m not a fan of reality TV shows; despite living in Essex, I have no time at all for TOWIE – I also had no idea who Vicky Pattison was (thank heaven for Google) but I have to be completely honest and say that despite my initial misgivings All That Glitters really was a very funny and entertaining read and had me snorting with laughter throughout. There was a real mixture of characters and personalities, both inside and outside the ‘apartment/studio,’ and although some had more likeability factor than others (in fact there were some that were downright obnoxious), they were all written very well.  Her best friend Molly was adorable and I was disappointed with Issy for taking her support for granted at times.

Issy Jones is clearly a very likeable but ambitious young girl. Having given up her place at a London Hair Academy to be with her family after a family illness, she is just plodding along in her mum’s Manchester hair salon doing blue rinses. However her family think she now deserves more and without her knowledge put her forward for a new reality TV show – ‘Can You Cut It?’ – (think ‘Big Brother’ in a hairdressing environment) with the ‘Confession Cam’ substituted for the Big Brother Diary Room. The rest of the story is about Issy’s time on that show and how the seduction of fame can change even the most grounded person into someone that family and friends do not recognise.  It also shows that you shouldn’t believe everything you read in the papers!

I’m assuming the author has based the story around her experience on the reality TV show, Geordie Shore, and if that is the case it is a real eye opener as to the manipulation by the TV production team that goes on behind the scenes. I had always believed that parts of these shows were set up anyway but these contestants were even provided with a list of topics to ‘spontaneously’ chat about. Almost their every move was recorded and monitored and every aspect of their life whilst in the studio environment was strictly controlled by the producers, with any developing romances quickly being encouraged for TV ratings and public consumption.

Although I enjoyed this, it was a little out of my usual comfort zone but If you are a fan of Vicky Pattison and/or reality TV shows and are looking for a fun and easy read then you can’t really go wrong with this one.

Vicky Pattison is one of the original Geordie Shore cast and appeared in nine series of the hit MTV show. Her autobiography, Nothing but the Truth, was a Number One Sunday Times bestseller in hardback and remained in the Top Ten for seven weeks. Before appearing on Geordie Shore, Vicky studied drama at Liverpool John Moores. Vicky is a genuine Geordie Girl, born and bred in Newcastle. This is her first novel.  Twitter – https://twitter.com/VickyGShore