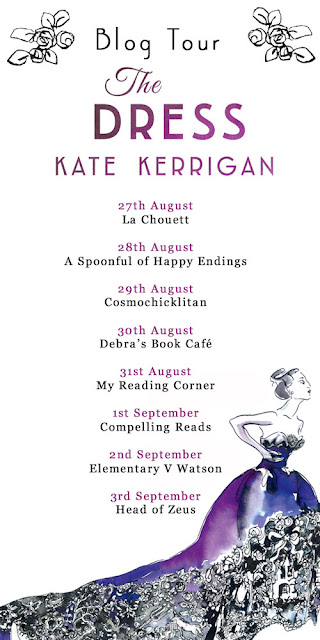 ‘The Dress’ by Kate Kerrigan

Published by Head of Zeus

Amid the glamour of The Dress Kate also deals with the crippling disease of alcoholism. In this blog post she talks movingly about her late brother, Tom, an alcoholic, whom she adored.

My brother Tom loved life. Not ‘life’ in the sense of ‘having a life’, which is how I have always defined it. I was always focussed on moving forward, my eyes pinned on the future. Life to me meant having a career, learning to drive, buying a house, finding a husband, having children; responsibility – paying bills, working. Life has always been something of a slog – a means to an end.

Tom simply loved the feeling of being alive in the moment. He loved laughing and talking, being creative and revelling in what others had created. He loved dancing, and making music and getting high. Tom found the world a difficult, unjust and cruel place so he created what he called “bursts of happiness” as he called them, to get him through each day. That was why he drank, because it made him feel more alive. I drank too. But then the drink stopped working and made me feel dead, so I stopped. Tom kept going back to try to recreate the magical feeling of excitement he once had – but in the end, it failed him.

Tom and I were Irish twins, 9 months apart. When we were together our spirits melded and often we created the natural high we had experienced through love and laughter as children.

I took Tom to see the pop group Bow Wow Wow at the Camden Palace when I was sixteen, and he was fifteen. Small and baby faced, I knew there was no way he could have got in without me. Already working as an apprentice hairdresser, I carried myself like an adult and with the heavy New Romantic eighties make-up I easily passed for mid-twenties.

I put some of my signature black kohl on Tom’s big blue eyes, and dressed him in a torn punk T-shirt and skin-tight jeans and gave him instructions on how to act as we travelled on the tube together to cool Camden Town.

“Don’t smile – let me go in first, just stand close behind me and DON’T mess about and make me laugh.”

It was a Saturday night and the queue to get into the Palais shuffled briskly with bewilderingly fashionable New Romantics. Tom was into punk: driving us mad with it’s tuneless pounding; worrying my mother buying frightening-looking singles and T-shirts with names like The Slits and Discharge emblazoned on them. He wasn’t a pop music fan and was disgusted with my love of bands like ABC and Heaven 17, punk seemed to reach his very soul. Punk became big at the same time as Tom was reaching puberty. He was angry, but unable to express it in the same way as many of his peers, on the football pitch or by scrapping in the schoolyard.  Punk gave voice to Tom’s pent-up masculine anger in a way that nothing else could. Plus it was all about safety pins and vomit and snot – so his sisters found it disgusting and our horror always amused him.

We blended easily in the crowd. I was wearing a voluminous white frilly blouse – and my maroon-dyed hair had been streaked with white blonde that day in a hairdressing experiment at work. I had scooped it up and sprayed it into an enormous, fluffy quiff. Tom had gelled his hair into spikes and had safety pins stuffed into the side of his mouth, hoping that nobody had noticed he hadn’t pierced them through. He did an impression of a depressed zombie and I had to restrain myself from laughing. He was determined to get in – to prove himself to me.

We passed by the enormous security men unnoticed, and when we got inside, it was all I could do to stop him running up and down the stairs of the enormous, gilded amphitheatre with childish excitement. “Calm down,” I kept telling him, “we could still get chucked out!”

We didn’t even go the bar. Drinking wasn’t the point then. It was the music and just being there.

From the top balcony we watched the band. Tom said they were crap. A Malcolm McLaren invention. Then we went down to the floor and danced wildly, mimicking the ludicrous sway of the fake New Romantic pirates in the audience, laughing out heads off. Neither of us felt truly a part of that scene, we were too young, and too suburban. We were safe and happy in our little twosome, throwing our arms around under the strobe lights – drunk on life.

Tom died six years ago. My heart broke. For a long time I mourned his wasted talent, his drinking, the hopelessness of a life half-lived.

Since then, bit by bit, in my baby sons smile, a rainbow stretched across Killala bay, a shared old joke with my husband, I have come to realise that life is, perhaps, best lived from one little burst of happiness to the next – exactly the way Tom lived it.

He burned bright and that night in Camden we exploded into life together.

That’s more happiness than some people experience in a lifetime. 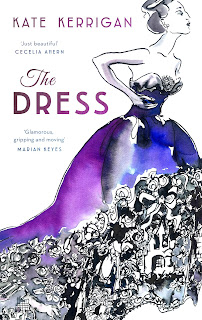 Lily Fitzpatrick loves vintage clothes, made all the more precious because they were once worn and cherished by another woman. Thousands follow her fashion blog and her daily Instagram feed. One day she stumbles upon an extraordinary story.


Joy Fitzpatrick not only shares Lily’s surname. She was a fashion legend, famed for her beauty and style in 1950s New York. For her 30th birthday, she is said to have commissioned a dress so beautiful that nothing in couture would ever be able to match it. She turned to a young Irish seamstress, called Honor Conlon, to create her sublime vision.


THE DRESS interweaves the passionate and surprising stories of three women. Joy and Honor, whose destinies are linked not only by a piece of timeless fashion, but by the ruthless love of one man. And Lily, determined to find out if the legendary dress still exists, and if it does, to bring it back to glorious life.