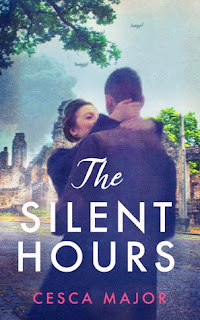 An epic, sweeping tale set in wartime France, The Silent Hours follows three people whose lives are bound together, before war tears them apart:

Adeline, a mute who takes refuge in a convent, haunted by memories of her past;

Sebastien, a young Jewish banker whose love for the beautiful Isabelle will change the course of his life dramatically;

Tristan, a nine-year-old boy, whose family moves from Paris to settle in a village that is seemingly untouched by war.

Beautifully wrought, utterly compelling and with a shocking true story at its core, The Silent Hours is an unforgettable portrayal of love and loss.

As soon as I saw this book mentioned on social media, it went straight onto my wishlist and I was so thrilled to find it unexpectedly through my letter box from the publisher a few weeks later.

I hadn’t realised when I started reading that this is based on a true story. It is told from multiple viewpoints, starting with Adeline, in the early 1950’s at St Cecilia Nunnery in south-west France.  Adeline is mute and by having access to her thoughts and memories it would seem that a traumatic event has rendered her speechless, although at this stage we don’t know what has happened or how she fits in to the story.  She has been given sanctuary by the nuns, and has been there for several years.

All the main characters tell their story in the first person narrative – this works very well as you really do feel as though you are privy to their every thought. Besides Adeline, other main voices include Isabelle and her brother Paul, who was away fighting. They write letters to each other, Isabelle in particular, pours out her hopes and fears together with the minutiae of daily life to her brother. Sebastian, a young Jewish banker, who can have no idea of the way his life will change; and Tristin, a 9 year old boy, too young to really understand why he and his family have to move from Paris to a small village many miles away, or why classmates suddenly disappear from lessons.

The switching of voices may sound confusing but I can assure you it isn’t. As the story progresses, it becomes clear how the characters connect. The romance between Isabelle and Sebastian starts very gently, by ‘coincidental’ meetings and develops into a love that neither could have anticipated.  I don’t want to give away any spoilers so that is all I am going to tell you – you need to read this wonderful book for yourself.

This is Cesca Major’s debut novel and it is truly stunning.  She writes beautifully, drawing the reader in by superb characterisation and a sense of place.  I became so completely engrossed in the story that I was desperate to read on to the next chapter to find out more.   The fictionalised lives of the characters and the reality of war form a story that is both emotional and shocking.   I absolutely loved it and I can’t wait to see what Cesca produces next.

My thanks to the publisher, Corvus, for the advance reading copy.

Wolfsangel by Liza Perrat.  I read this last year and reviewed it here.  In many ways it is very similar to The Silent Hours, it’s a powerful and poignant WW2 story based on a true event and set in a French Village under German occupation.

Cesca Major read history at Bristol University. She went on to work in television as a researcher and presenter for four years before becoming a history teacher. Her first real writing success came in 2005 when she was runner up in the Daily Mail Writing Competition for the best opening paragraph to a novel. She has won, or been placed, in some short story competitions since then including the annual competitions for: Women and Home, Wells Festival of Literature, Grace Dieu and has also had a short story published in the Sentinel Literary Magazine. She reads widely and has written regular reviews and features for the popular women’s fiction website www.novelicious.com. She currently works as a housemistress at a secondary boarding school in Berkshire. She lives in Bradfield with her husband and their brood of ex-battery chickens.