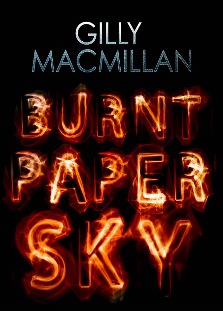 Rachel Jenner turned her back for a moment. Now her eight-year-old son Ben is missing.


But what really happened that fateful afternoon?


Caught between her personal tragedy and a public who have turned against her, there is nobody left who Rachel can trust. But can the nation trust Rachel?


The clock is ticking to find Ben alive.


WHOSE SIDE ARE YOU ON?

Rachel Jenner is facing every parent’s nightmare. She took her eyes off her 8 year old son Ben for a few moments and now he is missing. This of course makes Rachel a bad mother – doesn’t it?

Burnt Paper Sky is the author’s debut novel and is a cracker of a read. It’s the story of a missing child told through the eyes of his mother together with the voice of the detective assigned to the case – partly through the case notes of a police psychologist.

Rachel is a single mother and still struggling to cope with the loss of her marriage after her husband left her and Ben and remarried. In trying to be both mother and father to Ben, she allows him a little bit of independence to give him confidence but that split second decision has life changing consequences.

As well as following the police procedural investigation, the story is mainly told from Rachel’s perspective. Following an early televised police appeal, in which she doesn’t stick to the script, she becomes a victim of trial by media. Strangers comment on her apparent guilt and internet blogs condemn her for being a bad mother and for not taking care of Ben. Having journalists camped outside her door day and night make her feel like a prisoner; her raw emotional state is laid bare as her pain and anguish consume her and she begins to wonder who she can trust.

The story shows how easily we vilify people without knowing all the circumstances. We’ve all seen the televised appeals by victim’s families and I’ve been guilty of sometimes being suspicious of someone, just by the way they look or act.  People can be very judgemental – the public took against Rachel for letting Ben disappear on her watch, but didn’t condemn her husband for leaving his wife and child for another woman, on Boxing Day.

The other narrator is DI Jim Clemo. Through his eyes we see the police investigation. At first I wondered what he had suffered that would require him to see a psychologist but as the story progresses and we discover more of his background, it is clear that he has his own issues. It’s easy to forget that the police are human too and such cases like this affect them like it would anyone else.

As the police work their way through the possible suspects, other long held secrets come to light – my own list of suspects was ever changing, however, just when I thought I had worked it out, another little twist would appear.

This was a really addictive read and one that I couldn’t put down. It is an assured and confident debut with excellent characterisation alongside a strong and emotional storyline. I am certainly looking forward to reading future books by Gilly Macmillan.

My thanks to the publisher for the review copy via Netgalley.

Gilly Macmillan grew up in Swindon, Wiltshire and also lived in Northern California in her late teens. She studied History of Art at Bristol University and then at the Courtauld Institute of Art in London. She worked at The Burlington Magazine and the Hayward Gallery before starting a family. Since then she’s worked as a part-time lecturer in A Level Photography and a full-time mum.  Gilly lives in Bristol with her husband and three children. This is her first novel.