Forget Me Not – Luana Lewis 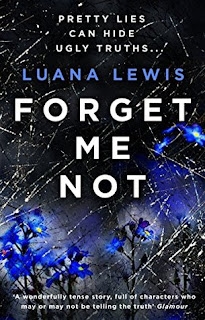 
When Rose’s daughter, Vivien, is found dead in a suspected suicide, Rose has questions nobody can answer. Wasn’t Vivien living the perfect life? A caring husband, a sweet little girl of her own.


Or the perfect murder?


But as the police investigation develops, their findings raise new questions. Did Vivien kill herself, or was she attacked? If so, who has something to hide?


As Rose struggles to piece together the secrets of her daughter’s life, the cracks in the family begin to show. But once Rose knows the answers, there’s no going back…


A gripping thriller perfect for fans of Daughter, The Book of You and C L Taylor’s The Lie.


The story starts with an intriguing premise. A dead body lies at someone’s feet but we don’t know who the person standing over the body is or whether the death is by suicide or murder.

With chapters told in the first person by Vivien’s mother Rose and also by way of flashbacks narrated by Vivien, a picture is slowly painted of the truth of Vivien’s life. Rose has never been that close to Vivien, she loved her, but as a single mother struggling with a young child and trying to build a career, Vivien was left to her own devices a lot of the time. Now Vivien is dead and Rose wants to be part of her 8 year old granddaughter, Lexi’s life, but does she deserve to be and will Ben, Vivien’s husband let her?

This is an excellent twisty story which at various stages had me suspecting everyone. As the tale progresses, more is revealed about Vivien and her seemingly ‘perfect’ life. Rose herself wasn’t instantly likeable but I felt that she genuinely had her granddaughter’s interests at heart and there were times when I feared for Lexi being part of such a dysfunctional family.

With a seemingly psychotic ex friend in the story, a grieving husband and a troubled child, Forget Me Not has all the elements of an unnerving and disturbing thriller. It is very much character, rather than action driven, but I couldn’t put this one down and there were times when the tension got too much that I was holding my breath.

Every family has their secrets and no-one really knows what goes on behind the curtains. Luana Lewis certainly has written a disturbing and engaging read. She is definitely an author I want to read more from.


Source: My own purchased copy.   I bought the paperback rather than the Kindle version this time, as I wanted that beautiful cover on my bookshelf!

Luana Lewis is a clinical psychologist and author of two non-fiction books. As well as writing for several newspapers, magazines and journals, she has recently completed an MA in Creative Writing at Bath Spa University. She has also attended workshops at Arvon and City Lit.