While My Eyes Were Closed – Linda Green 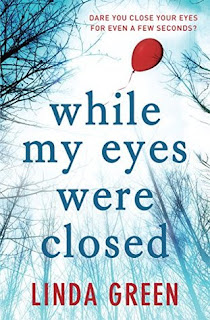 A nail-biting psychological drama for fans of The Bones of You, Jenny Eclair and Lisa Jewell.

One, two, three . . . Lisa Dale shuts her eyes and counts to one hundred during a game of hide-and-seek. When she opens them, her four-year-old daughter Ella is gone. Disappeared without a trace. The police, the media and Lisa’s family all think they know who snatched Ella. But what if the person who took her isn’t a stranger? What if they are convinced they are doing the right thing? And what if Lisa’s little girl is in danger of disappearing forever?

“Your body realises you have lost your child before your brain does”.

Busy mum Lisa Dale is distracted by a phone call and takes her eyes off her 4 year old daughter Ella, for just a few minutes whilst they are in the park and then the worst happened. Ella disappears. At first Lisa thought she was playing hide and seek but then when time passed she had to face the inevitable – that Ella had wandered off and got lost or the worst thing imaginable – someone had taken her.

This was my first book by Linda Green. I do love a thriller and although there have been a plethora of missing child thrillers recently, this one did sound a little different in that the person who takes her does so for concern, believing that the child is not being looked after properly. They convince themselves they have done nothing wrong and are only acting for the good.

This story is told in alternative chapters by three main characters. There is a back story told by one of the characters which eventually ties in to the conclusion. This was well done and although I suspected what had happened quite early on, it wasn’t until fairly late on in the story that I realised how it linked in. It’s not an in depth police procedural and the Family Liaison Officer assigned to the family is the main police spokesperson throughout but it focuses more on the abductor, their reasons for taking Ella and the pain caused to her family, especially her mother Lisa.  Both Lisa and her family came under scrutiny and we see how quick people, especially the Press, are to judge and how easy it is to jump to the wrong conclusion.

This is very much character driven rather than action led and has a gentler pace than many of the psychological thrillers I am used to but that is not a criticism. We see how grief affects people and the unpredictability of the abductor’s moods did make me worry for Ella. With excellent characterisation and the right amount of tension and suspense, this psychological drama was a really good read and one I would recommend.

If you enjoyed Burnt Paper Sky by Gilly Macmillan, then this may appeal too.

My paperback copy was received from the Amazon Vine review programme.

At the time of writing this post, the Kindle version is available for just £1.99. 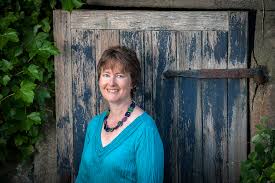 Linda Green is an award-winning journalist and has written for the Guardian, the Independent on Sunday and the Big Issue. Linda lives in West Yorkshire.

2 thoughts on “While My Eyes Were Closed – Linda Green”