When She Was Bad – Tammy Cohen 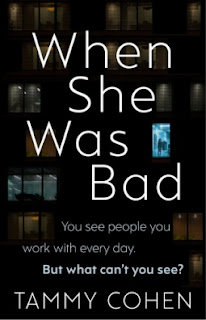 YOU SEE THE PEOPLE YOU WORK WITH EVERY DAY.


BUT WHAT CAN’T YOU SEE?


Amira, Sarah, Paula, Ewan and Charlie have worked together for years – they know how each one likes their coffee, whose love life is a mess, whose children keep them up at night. But their comfortable routine life is suddenly shattered when an aggressive new boss walks in ….


Now, there’s something chilling in the air.


Who secretly hates everyone?


Who is tortured by their past?


Who is capable of murder?


When She Was Bad is a two strand story – initially beginning in America but with the main chapters set around a London recruitment agency. The American narrator is Dr Anne Cater (many UK book bloggers will recognise that name!) who is a child psychologist, remembering one of her most famous and horrific cases –dubbed by the press ‘the House of Horror’. Although sympathetically portrayed, this part of the story did make for uncomfortable reading at times. When she is alerted by a friend that something bad has happened in the UK and to watch the news, she seems to be half expecting it.

Friends and colleagues working at the Mark Hamilton Recruitment are dismayed when their old boss Gill, becomes a victim of productivity and cost cutting measures and is sacked. Her replacement, Rachel Masters, appears to be a manipulative, cold hearted bitch who thinks nothing of playing mind games with her staff and pitting one against the other although to be fair she been brought in by management specifically to shake the department up and make it profitable. They were once a friendly and cohesive team – not any more, the atmosphere is now toxic. With each of them facing their own personal issues and scared for their jobs, they no longer know who to trust and turn on each other. Each chapter is told from the perspective of one of the main characters and this is an easy way of getting to know their background.

“Charlie glanced over at Amira who was in turn exchanging wide-eyed glances with Sarah. The tension at the table was like an uninvited guest who’d arrived without warning and was refusing to leave”.


Watching the characters in this story was a bit like watching a car crash in slow motion. You know that something awful is going to happen but it’s wondering exactly what that kept me turning the pages. Initially I thought I was being oh so clever in figuring out where the story was going and I had even had certain characters in mind for the reveal. However, the author is an expert in misdirection and the twists that kept appearing made me doubt everything.

I’m a huge fan of Tammy’s books and have reviewed a few here on the blog. When She Was Bad is a wonderfully twisted story with characters that you will both empathise with and despise. If you are anything like me, the ‘team building’ weekend will have you cringing with horror – it would be hard to think of anything worse! It’s also a salutary lesson that the ‘experts’ don’t always get it right!

This was such an addictive read it only took a couple of days to race through it. When you consider how much time we spend with our work colleagues, this story clearly shows that you never really know them.

A twisty, compelling and addictive psychological thriller that will make you look at your work colleagues in a different way – this is certainly another winner from Tammy Cohen.

My thanks to Lovereading for the paperback copy and also to the publisher via Netgalley.

Tammy Cohen (who also writes as Tamar Cohen) is a freelance journalist writing for national magazines and newspapers. After a late start, she has now written six novels – The Mistress’s Revenge, The War of the Wives, Someone Else’s Wedding, The Broken and Dying For Christmas and First One Missing – all published by Doubleday/Black Swan. She is a member of the Killer Women crime writing collective and lives in North London with her partner and three (nearly) grown children, plus one very badly behaved dog.

8 thoughts on “When She Was Bad – Tammy Cohen”