On the night Bernadette finally has the courage to tell her domineering husband that she’s leaving, he doesn’t come home. Neither does Conor, the little boy she’s befriended for the past five years. Also missing is his lifebook, the only thing that holds the answers. With the help of Conor’s foster mum, Bernadette must face her own past, her husband’s secrets and a future she never dared imagine in order to find them all.

Exquisitely written and deeply touching, The Mountain in My Shoe is both a gripping psychological thriller and a powerful and emotive examination of the meaning of family … and just how far we’re willing to go for the people we love.

It’s an absolute pleasure to be taking part in the blog tour for The Mountain In My Shoe. I reviewed Louise’s debut novel on the blog last year (How To Be Brave) and it was one of my top books of 2015. Louise Beech has written another stunning book and this is definitely a sure contender for my 2016 books of the year list. If you would like to win a paperback copy signed by Louise then entry details are at the end of this post.

The story centres around Conor, a 10 year old boy in the care system who has been shunted from various foster homes all his life. He does have a birth mother but although she is unable to care for him she won’t let him be adopted. Despite such a difficult start to his life, Conor comes across as a likeable, resilient character albeit with his own behavioural issues at times. He is bright, loves art and idolises Mohammed Ali and now that he has found a loving home with foster mother, Anne, he appears to be settling in well. Conor’s backstory is cleverly told by using a ‘Life Book’ which contains contributions by way of letters and photos from people, including social workers, teachers and foster carers who have played a significant part in his short life. This Life Book is intended to be passed to Conor when he is 18 so that he has a record of his early life which would normally be passed on by parents and family. Through these notes and letters, we build up a picture of the sad and disrupted life that Conor has endured.

Bernadette’s story also appears to be rather a sad one and she cuts a rather lonely figure in a difficult marriage with suggestions of abuse. She is a ‘Befriender’ to Conor; a voluntary role, which she does secretly and she has taken this little boy to her heart. When Conor goes missing the same night that her husband does not return home at his usual time, she is more worried about Conor than her husband, feeling angry that he has changed his routine on the very night that she had decided to leave him. There is something else missing that evening – Conor’s Life book which Bernadette had borrowed and which was on her bookshelf.

Louise Beech has again demonstrated her talent for writing emotional and heart tugging stories and her writing is just beautiful. The story is written with compassion and is clearly written from the heart. Reading the entries in the Life Book was, for me, very moving. I would recommend that you don’t skip past these as you would be missing out on such an important part of the story – I really felt for Conor and for all the other young children like him, placed in care through difficult family circumstances and being passed from pillar to post when all they want is some stability and a loving home of their own.

While foster mother Anne and Bernadette are out searching for Conor, there is a feeling of foreboding in wondering whether there was any link between the two disappearances and what may have happened to the young boy. As the night goes on, a special bond is formed between the two women and life shattering revelations are disclosed .

Although the story is set around Humberside, a part of the country that I am unfamiliar with, there is such an excellent and descriptive sense of place that I could easily visualise the setting.

The narrative is voiced by both Bernadette and Conor and there are many layers to the story – the excellently drawn characters that feel so believable; the suspense element, dysfunctional relationships and families and how easily people can can take a wrong path in their lives.   Reading about children like Conor, really brings it home how fortunate many of us are to have had loving and stable family backgrounds.

The Mountain in My Shoe is a fabulous book and one that has cemented Louise Beech as one of my ‘must read’ authors.

My thanks to the publisher for the paperback copy to review. 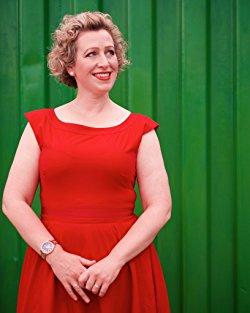 ch remembers sitting in her father’s cross-legged lap while he tried to show her his guitar’s chords. He’s a musician. Her small fingers stumbled and gave up. She was three. His music sheets fascinated her – such strange language that translated into music. Her mother teaches languages, French and English, so her fluency with words fired Louise’s interest. She knew from being small that she wanted to write, to create, to make magic.

She loves all forms of writing. Her short stories have won the Glass Woman Prize, the Eric Hoffer Award for Prose, and the Aesthetica Creative Works competition, as well as shortlisting twice for the Bridport Prize and being published in a variety of UK magazines. Her first play, Afloat, was performed at Hull Truck Theatre in 2012. She also wrote a ten-year newspaper column for the Hull Daily Mail about being a parent, garnering love/hate criticism. Her debut novel was a Guardian Readers’ pick for 2015.

She is inspired by life, history, survival and love, and always has a story in her head. Her debut novel, How to be Brave, came from truth – when Louise’s daughter got Type 1 Diabetes she helped her cope by sharing her grandad’s real life sea survival story. Her second novel, The Mountain in my Shoe, will be released in September 2016 and was inspired by her time working with children in the care system.

When she was fifteen Louise bet her mother ten pounds she’d be published by the time she was thirty. She missed this self-set deadline by two months. Her mother is still waiting for the money.

I was fortunate to have been able to attend the London launch at Waterstones the other week for this lovely book and I bought a copy for Louise to sign so that I could offer a giveaway.  To enter, please follow the Rafflecopter instructions below.  I’m sorry but for cost reasons, postage will have to be to Europe only.

Giveaway of a signed paperback copy