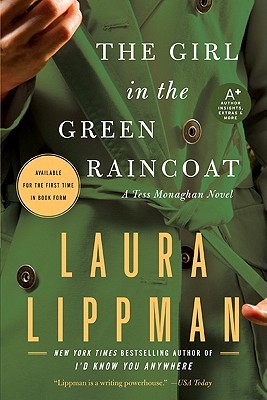 In the third trimester of her pregnancy, Baltimore private investigator Tess Monaghan is under doctor’s orders to remain immobile. Bored and restless, reduced to watching the world go by outside her window, she takes small comfort in the mundane events she observes . . . like the young woman in a green raincoat who walks her dog at the same time every day. Then one day the dog is running free and its owner is nowhere to be seen. Certain that something is terribly wrong, and incapable of leaving well enough alone, Tess is determined to get to the bottom of the dog walker’s abrupt disappearance, even if she must do so from her own bedroom. But her inquisitiveness is about to fling open a dangerous Pandora’s box of past crimes and troubling deaths . . . and she’s not only putting her own life in jeopardy but also her unborn child’s.

Previously serialized in the New York Times, and now published in book form for the very first time, The Girl in the Green Raincoat is a masterful Hitchcockian thriller from one of the very best in the business: multiple award-winner Laura Lippman.

Private Investigator Tess Monaghan has been ordered to have complete bedrest in the last weeks of her pregnancy and has had to leave her business in the capable hands of a colleague, the delightfully named Mrs Blossom. Bored and fed up whilst laying in the sun porch, Tess notes the daily walk of a young blonde woman in a green raincoat and her small greyhound (also wearing a matching green coat) in the nearby park. One day the dog appears running from the park, trailing its lead, but no owner appears. Tess is more than intrigued; she has to know what has happened and from her daybed, directs an investigation not realising the potential danger she is exposing herself and others to.

I remember watching the classic Hitchcock film “Rear Window” many years ago and any similarity with this story and the film is fully intentional and acknowledged by the author. Even though this is a novella of just 158 pages, Laura Lippman has created a great character in Tess Monaghan. She is gutsy, witty and wholly believable. Her boyfriend Crow, best friend Whitney and the above mentioned Mrs Blossom complete the cast of regular characters in Tess’ life all of whom I found engaging. Even the minor characters were fleshed out enough to have a meaningful part in the story. Dempsey, the missing owner’s dog has his own part to play and his antics with the antique chamber pot provided a few amusing moments.

The storyline has plenty of pace for such a short book with dubious characters, twists and suspense to the end and as a diversion from the mystery aspect, there is a sub story involving the love life of one of Crow’s young colleagues.

This was the first Laura Lippman book I had read and also the only one so far in the Tess Monaghan series (of which this #11) however I shall be seeking out the back catalogue. I enjoyed the character of Tess too much to leave her stories at this book.