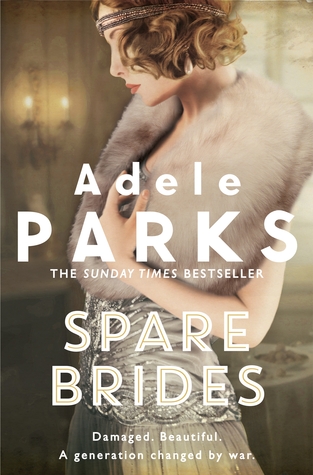 Damaged and beautiful, they were the generation who lost so much and became ‘spare brides’. The richly compelling and emotional new novel from Sunday Times bestselling author Adele Parks is the powerful story of four extraordinary women left to pick up the pieces of their lives, in the scarred, glamorous and endlessly fascinating post-First World War era.

New Year’s Eve, 1920. The Great War is over and it’s a new decade of glamorous promise. But a generation of men and women who survived the extreme trauma and tragedy will never be the same.

With countless men lost, it seems that only wealth and beauty will secure a husband from the few who returned, but lonely Beatrice has neither attribute. Ava has both, although she sees marriage as a restrictive cage after the freedom war allowed. Sarah paid the war’s ultimate price: her husband’s life. Lydia should be grateful that her own husband’s desk job kept him safe, but she sees only his cowardice.

A chance encounter for one of these women with a striking yet haunted officer changes everything. In a world altered beyond recognition, where not all scars are visible, this damaged and beautiful group must grasp any happiness they can find – whatever the cost.

Adele Parks is best known for her contemporary writing, which I’ve always enjoyed. Spare Brides, is her 14th novel and a debut in as much as it is her first work of historical fiction.

The story begins in the 1920’s. The Great War is over however so many lives have changed irreversibly. In particular, those men that survived the war have been damaged forever, both mentally and physically. The world is moving forward but there are some struggling to find their place and cope with the changes.

At the very beginning we are introduced to Lydia – Lady Chatfield. She has a privileged life, married to Lawrence, who on his father’s death will inherit the title and estate of the Earl of Clarendon. Lydia knows nothing of hardship and at first sight she appears to be rather shallow and distant from reality. She has a maid to dress her and her main concern is whether a dress will arrive in time from France for a New Year’s Eve ball. A major sadness in her life fuels her feelings of shame and resentment towards her husband for not having served during the war.

I have to say now that I loved this book. The storytelling and characterisations were superbly crafted and each character was vividly bought to life with both passion and sympathy. The story is not only about Lydia but also her three friends Ava, Sarah and Beatrice. Each were very different people but were affected deeply by the war in some way. Sarah lost her beloved husband in the trenches and now as a widow feels that she has lost her purpose and identity and relies on grace and favour lodgings provided by her brother Samuel, who himself was severely injured on active service. Sarah’s sister Beatrice has her own fears. Following the war, there is a shortage of men (giving rise to the title ‘Spare Brides’) and Beatrice has neither looks nor money to assist her in acquiring a husband. Ava is a fun-loving, hedonistic character. Her father prospered on the back of the war and although Ava has plenty of money, she has very little direction. She joins campaigns to fight for women’s rights but is still searching for something more to find fulfilment.

All four women have a longing for something more from life. A chance meeting with a complete stranger will be the catalyst for one of them to make life changing decisions which will have far reaching consequences for not only herself, but for those around her.

This is very much a character driven story, with the lives of the four women connecting and progressing into a tale of passion and recklessness. The tragedy and horrors of the war and the suffering that men endured at the front are much in evidence. There is more than a sufficient amount of historical detail to indicate that Adele Parks has extensively researched this period; the suffering and hardship for ordinary citizens, together with the glamour and glitz of life for the upper classes all makes for an extraordinary and interesting read.

I would love to see a sequel. This was a complete change of direction that absolutely worked for me. It was a fabulous story and one which I highly recommend.

My paperback copy was received through the Amazon Vine review programme