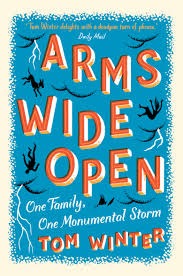 Arms Wide Open is a poignant and bitingly funny tale of a family suspended in a cyclone of turmoil.

Jack and Meredith are non-identical twins; the only similarity between them is their lives rapidly falling apart.

Jack’s high-flying career in advertising has crashed and burned, all that remains is a Maserati and a nervous disposition. Meredith’s world is also crumbling – a decomposing yogurt in her fridge now a symbol of her failed marriage. Her children, Jemima and Luke, offer little support, too consumed with the worlds of online dating and amateur taxidermy.

All their lives, Jack and Meredith believed their father to be dead. One day, a throwaway comment leads Jack to question this, but with their mother fading ever-deeper into the grip of dementia, answers are hard to come by. As revelations start to untangle, the twins soon learn that what you seek is not always what you find…

Tom Winter is a new author to me but this, his second book, was a delight to read. It was both poignant and funny and had a main cast of wonderful characters that, possibly with the exception of the downright eccentric, you could identify and engage with.

Jack and Meredith are 43 year old twins.  Meredith’s life hasn’t turned out as she expected.  She feels a failure because her husband has left her for another woman and seeks solace in plants and gardening. She diligently visits their ailing mother in a nursing home despite the fact that her mother has never shown her any affection, only unkind criticism.

Jack, meanwhile, has enjoyed a rather charmed life and has the Maserati to prove it. However life has a way of biting you on the backside and with his career and personal life now in meltdown the time has come for both Jack and Meredith to confront their past in order to be able to deal with their future.

Jack and Meredith are complete opposites and it’s the interaction between them that makes this book so special. Add to the mix Meredith’s teenage daughter Jemima – so streetwise in some ways but also so very naive and who deals with her unhappiness by hiding behind online dating forums; 11 year old Luke, whose unusual behaviour makes him a target for bullies and Edna, the elderly next door neighbour who is still expecting Hitler’s bombs to drop and you have a wonderfully dysfunctional family providing the perfect opportunity for some black humour and some very poignant moments. I have to give a mention here to Reggie, Edna’s elderly and neglected dog, who stole my heart.

The story is told by present day character narrations interspersed with chapters going back from 5 – 45 years so that gradually the reader knows the background to Jack and Meredith’s life.

I don’t want to give away too much and it really is a book best discovered by reading it yourself but I can’t praise this book highly enough, it is a book you simply must read. The writing is taut and clear and not a sentence is wasted.  I am now very much looking forward to reading the author’s debut novel Lost and Found.

The book will be available through Lovereading and other booksellers in April 2014. 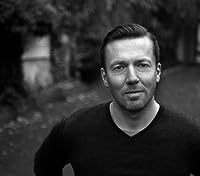 Tom Winter is a British writer living in Berlin. His debut novel,
Lost & Found, was published in five languages. In August 2013 it was
chosen as the Book of the Month by the Mail on Sunday’s You Magazine
book club. That summer, the Kindle edition was also a No. 1 bestseller
on Amazon UK.  Tom’s second book, Arms Wide Open, will be published
on 17 April 2014. He is currently working on his third novel, Days of
Wonder, which will be published in August 2015.  He lives alone, with a potted plant and an assortment of noisy neighbours.