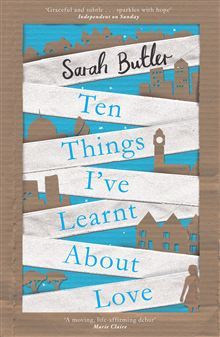 Alice has just returned to London from months of travelling abroad. She is late to hear the news that her father is dying, and arrives at the family home only just in time to say goodbye. Daniel hasn’t had a roof over his head for years, but to him the city of London feels like home in a way that no bricks and mortar ever did. He spends every day searching for his daughter; the daughter he has never met. Heart-wrenching and life-affirming, this is a unique story of love lost and found, of rootlessness and homecoming and the power of the ties that bind. It is a story for fathers and daughters everywhere.

For a debut novel this is an excellent read. The story centres around two characters – Alice in her early thirties, who spends her time travelling and can’t seem to settle after leaving a dead end relationship and Daniel, a homeless man in his sixties who spends his days walking the streets of London and picking up things discarded by other people.

Alice comes home to London to see her dying father. She has a strained relationship with her family – her father and two older sisters, and has never felt that she fitted in. Her mother died when she was a child and she has always carried this feeling that it was her fault and that she was to blame.

Daniel is walking the streets looking for the daughter that he never knew. He carries with him the memory of a lost love and also those feelings of a difficult relationship with his family.

When the story begins, these appear to be two random characters however as the book progresses, you realise how their stories overlap.

It did make a little while to get into this book and some parts I did find quite slow, hence the four stars, however the descriptions of London are so well done and give a real sense of place. The characters of Alice and Daniel are quite similar – neither feels that anywhere is home and both prefer to wander rather than be tethered by the normal trappings of life. Daniel sees names and people by colour – I have to admit I didn’t really understand this concept, (although I know there is a medical name for it), but he has the ability to make something quite lovely out of the bits of rubbish he collects and each colour means something to him.

Each chapter is told alternately by Alice and Daniel and begins with a list of 10 statements made by each of them. It is a very clever way of giving insight into the characters without interrupting the narrative.

This was definitely a book worth reading and I look forward to reading more by this author.

My paperback copy was received through the Amazon Vine review programme.

Sarah Butler is in her early thirties and lives in Manchester. She runs a
consultancy which develops literature and arts projects that explore
and question our relationship to place. She has been writer in residence
on the Central Line, the Greenwich Peninsula, and at Great Ormond
Street Hospital, and has taught creative writing for the British Council
in Kuala Lumpur. Ten Things I’ve Learnt About Love is her first novel, and will be published in twelve languages around the world.