The Facts of Life and Death – Belinda Bauer 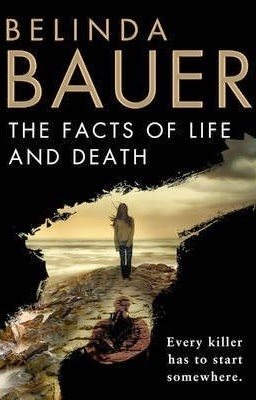 This is how it begins. Lone women terrorised and their helpless families forced to watch – in a sick game where only one player knows the rules. And when those rules change, the new game is Murder. Living with her parents in the dank beach community of Limeburn, ten-year-old Ruby Trick has her own fears. Bullies on the school bus, the forest crowding her house into the sea, and the threat of divorce. Helping her Daddy to catch the killer might be the key to keeping him close. As long as the killer doesn’t catch her first…

I very much enjoyed a previous book by this author, Blacklands, and was delighted to be given the opportunity by Dead Good on Goodreads to read the latest release.  The two books that I have so far read both appear to have the same very distinctive style – the location and plotline may differ but there is always that sense of atmospheric darkness to the story.

The story is partly written in the voice of 10 year old Ruby Trick.   Sad little Ruby captured my heart straight away.   She lives with her parents, John and Alison in a small ramshackle  cottage in Limeburn, a small village community in Devon, sandwiched between the sea and the forest.  Ruby doesn’t have many friends, she is bullied by other children and is the girl who is always left on her own in the school playground.   For me it was her vulnerability and innocence that made her character so realistic.  Ruby’s father is jobless and her mother works all hours to support them all.  Her parents are having problems and are constantly arguing however Ruby adores her feckless father and will do anything to have his love and attention.  She is overjoyed when he makes her his “Gunslinger Deputy” and takes her with him on late night drives looking for the attacker.

The bleakness of the location, the stormy weather and the sense of isolation all add to the darkness of the story and when the attacks on young women escalate you can feel the fear and a sense of foreboding that worse is yet to come.

This is not a fast paced story and is very much character driven with a superb cast who were all so believable.  The scene is set very slowly and carefully for both character definition and location and then gradually the tension increases as does the body count.   In the build up to the dramatic conclusion my heart was in my mouth and I certainly couldn’t put the book down until the end.   Another success for Ms Bauer and I shall now be hunting out my copy of Darkside from my bookshelves to read.

My thanks to Dead Good for the hardback copy to review.

Belinda Bauer grew up in England and South Africa. She has worked as a journalist and screenwriter, and her script The Locker Room earned her the Carl Foreman/Bafta Award for Young British Screenwriters. With her debut, Blacklands, Belinda won the CWA Gold Dagger for Crime Novel of the Year. In 2013 she won the CWA Dagger in the Library for her entire body of work. Her fourth novel, Rubbernecker was shortlisted for the CWA Gold Dagger. Belinda lives in Wales.

4 thoughts on “The Facts of Life and Death – Belinda Bauer”