I’m delighted to be taking part in the blog tour for Pets Aplenty.  My review is posted below but do check back on Saturday 11 October when I will be be hosting a guest post written by Malcolm. ﻿ 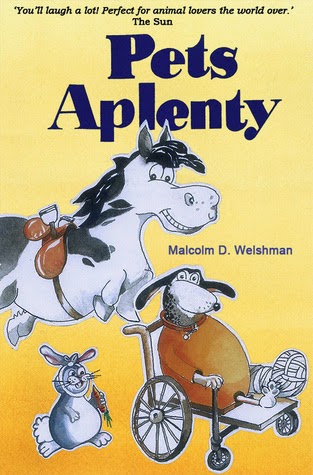 Join novice vet, Paul Mitchell, in a further six months of hilarious escapades he experiences while working at Prospect House Veterinary Hospital. He’s confronted by a ravenous pig while sunbathing naked in a cornfield. He locks jaws with a caiman with scale rot and battles with Doug, a vicious miniature donkey that’s always sinking his teeth into him. It ends with a Christmas pet blessing which erupts into pandemonium as frightened pets and owners scatter through the pews. Throughout his adventures, Paul is loyally supported by the team at the hospital – in particular Beryl, the elderly one-eyed receptionist, and, Lucy the junior nurse – together with whom he shares this merry-go-round of mayhem. It’s a gripping, fast page-turner that’s guaranteed to keep animal lovers entranced.


Thank you for saving Furry.  I was very worried he might have died or something worse might have happened.


Lots of love from Emma.

Pets Aplenty is the third book by Malcolm Welshman (the first being Pets in a Pickle and Pets on Parade, the second).  I hadn’t read either of these before I started Pets Aplenty but it didn’t matter at all – this can easily be read as a standalone.

Having been a huge fan of the James Herriot books in my teenage years, I always enjoy reading about animals and their escapades and this book was very enjoyable indeed.  From the very first chapter where Paul has been coerced by his colleagues to dress up as a huge rabbit in the name of fundraising and hop around the local shopping precinct whilst being photographed by the local paper, I was hooked.

There are many entertaining and humorous tales to enjoy – as well as some sad ones.  Paul Mitchell may be a young vet still finding his feet but he is a very likeable character and deals with his patients, even the most difficult ones, with respect and humour – we meet Jimmy, the transgender confused parrot; Miss Piggy, the Houdini of the porcine world, Emily the springer spaniel (who stole my heart – when you read her story you will see why).  Having read the story of the escaped python, I’m so glad I that don’t live next door to a vet who takes his work home!

Paul’s colleagues at Prospect House, the veterinary surgery, have their own distinct characters – from beady eyed Beryl the receptionist who rules with a sharp tongue, to Lucy, the young nurse from Paul’s past. They each play a part in this story and it’s the human interactions, as well as the animal ones, that make for such an enjoyable read.

Pets Aplenty is very entertaining and has been written with warmth and humour.  It may not be suitable for younger children (there are some adult themes) but if you’re looking for a well written, witty read (with plenty of puns) then I’m sure you would enjoy this.

My thanks to SilverWood Books for inviting me to take part in this blog tour and for providing the e-book for review.

Malcolm Welshman is a retired vet who has worked at London Zoo, in a small animal hospital and as a consultant dealing with exotics. He has written for newspapers such as The Sunday Times and The Daily Mail and national magazines including The Lady, Yours, Cat World and Dogs Today and was the My Weekly vet for fifteen years. He is a BBC Radio panellist and a guest speaker worldwide on cruise ships.