I Hope You Dance – Beth Moran 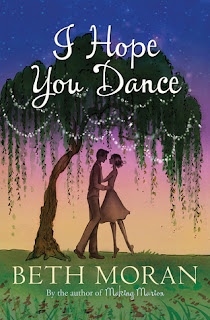 “My Mother always told me I had lousy timing. Of course, she was talking about the Viennese waltz, the Argentinian tango and the foxtrot. My current timing issue involved five Chinese businessmen and a psychological breakdown.”

All Ruth had ever wanted to do was marry David Carrington, the boy-next-door. They would spend their days counting frogs and live in the Big House with the wonky dog. Instead David broke Ruth’s heart and she left Southwell, promising never to return. Fifteen years on Ruth has hit rock bottom. There is no way out. Except one…Ruth moves home to face her estranged father, whirlwind mother, and the boy-next-door. A quirky story of loss and hope, friendship and love, and daring to dance again.

Beth Moran was a new author to me and I hadn’t read her previous book, ‘Making Marion’ when I was asked by the publisher to review I Hope You Dance and to take part in their blog tour, (you can read Beth’s guest post for the blog tour here) but I’m so glad that I did say yes. This book was a delight to read and Beth Moran is clearly an author to keep an eye out for.

Our main character is Ruth Henderson. She has recently lost her partner Fraser in an accident. Unbeknown to Ruth, Fraser was heavily in debt and Ruth and their 14 year old daughter Maggie’s comfortable lifestyle comes to an abrupt end on his death when creditors start chasing for money. After leaving her job following a row with her lecherous boss, Ruth reluctantly decides the only way forward is to up sticks and for herself and Maggie to move back in with her parents. Not an easy decision as they had been estranged for some years following a family rift.

Family and friendship are very important in this story. Ruth has lost her confidence and would rather stick to safe, if not very exciting part time jobs rather than put herself in situations where she could fail. There were times initially when I felt a little frustrated with her and I was willing her on to deal with things rather than trying to hide away. Her daughter Maggie is taking her father’s death and the change in circumstances very badly and her bad behaviour, both at school and at home, is yet another problem for Ruth to deal with. At times Maggie’s behaviour was so rude and obnoxious, I had to keep reminding myself that this was a 14 year old girl grieving for her father and feeling vulnerable and lost after having her life turned upside down.

Ruth’s salvation comes into the form of the friends she makes after an introduction by Lois, the pastor’s wife, to a group of women who meet up regularly for a ‘girls night in’ where gossip and secrets can be shared in confidence, “what is said in the house stays in the house”. They are a diverse set of characters but they are all kind at heart and the support and help they give to each other, and indeed to others in the community is lovely to see and the situations that these women find themselves in brings some humour to the story.

Events of the past have left their scars on Ruth’s heart but with the help of her new friends Ruth begins to live a little again, however, her daughter Maggie is unhappy at the thought of her mother dipping her toes in the dating pool and makes her feelings quite clear.

I really enjoyed this story of a woman trying to find her way again and get her life back on track. There is a Christian feel to the story as the lives of many characters revolve around the local church and its community activities but this is not overpowering at all and indeed adds to the beauty of the tale. Lois, the pastor’s wife is a breath of fresh air. She is about the same age as Ruth and whilst she is willing to help anyone, she doesn’t take any bullshit. Don’t for one moment think that the community feel makes for a too sweet read; there are different elements to this story – family drama, romance and humour and then the story takes a rather sinister turn, which takes it from what could be a lighter read to something darker. The reference to dancing becomes clear during the story and explains the family rift and why Ruth has never felt good enough for her family.

All the characters in this book are excellently drawn and so very believable – I had my favourites; there are those that you will love straight away, others that will make you want to punch them in the face, and then those that grow on you as the story progresses.

This is a warm and uplifting read and definitely one that I am happy to recommend. I would certainly read more by this author.

My thanks to the author and the publisher for the review copy and for inviting me to take part in the blog tour.

After studying Biochemistry at university, Beth initially worked in cancer research, and then spent ten years teaching antenatal classes, before giving it up to follow her dream of becoming a writer. She is a passionate communicator, regularly featuring on BBC Radio Nottingham, and is part of the national leadership team of the women`s network Free Range Chicks, which gives her ample opportunity to organise events that include two of her favourite things – food and dancing. She lives in Nottinghamshire (where she grew up) with her husband and three children.

Beth Moran is also the author of the award-winning Making Marion (2014), which was praised by Publishers Weekly as ‘one of the best inspirational novels of the season’.

2 thoughts on “I Hope You Dance – Beth Moran”