What Happens at Christmas – T A Williams – Excerpt and Giveaway 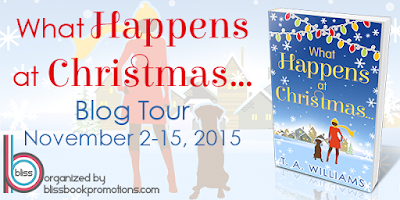 Title: What Happens at Christmas…

For the perfect Christmas…

When career-girl Holly Brice learns that her estranged father has died, she decides to take a trip down memory lane and find out about the man she never knew. Arriving in the sleepy little Dartmoor village, she’s shocked to discover that she’s inherited the cosy little cottage she remembers so fondly, a whole load of money –and her father’s adorable dog, too!

And as the first snowflakes begin to fall and Holly bumps into her gorgeous neighbour, Jack Nelson, life gets even more complicated! Men have always been off the cards for high-flying Holly, but there’s something about mysterious writer Jack that has her re-thinking her three-date rule… 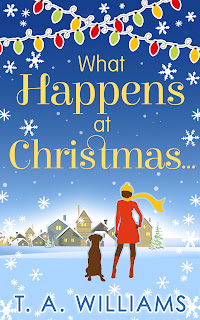 As she appeared, the dog jumped to his feet, the whole back half of him wagging along with his tail, as he made delighted whining sounds. Holly stepped off the stair and gave him a hug. It was, she reflected, rather nice having somebody so pleased to see her in the morning, especially as she had only just climbed out of bed.

‘Hello, handsome, ready for your walk?’ As ever, he rushed to the door with great enthusiasm. Holly pulled on her new Wellingtons and buttoned herself into the yellow oilskin. She picked up a hat and unlocked the door. It was noticeably warmer outside than the previous days, but there was a gusty wind and the rain was relentless. Even Stirling hesitated before venturing out. Holly pulled up her hood, locked the door and set off along the stream with him. By now, dawn should have been breaking, but it was still pitch black. Nevertheless, after a few minutes, her eyes became accustomed to the gloom and she was able to pick her way alongside the now far fuller stream as it rushed past, swollen by the rain. They did an abbreviated circuit this morning and were back at the house by half past eight, by which time a grey glow was visible in the eastern sky and she could begin to make out shapes and objects. As she opened the door, she glanced over to Jack’s house and was pleased to see the bag with the bottles had disappeared, hopefully before the onset of the rain.

No sooner had the dog got inside the house than he shook himself, sending water everywhere. Holly struggled out of her waterproof gear, hung the coat on the back of the door and grabbed an old towel. She called the dog over and set about drying him. Within a very short time, the towel was soaked, as was she. The dog obviously loved all the attention and was doing his best to reciprocate by rubbing himself up against her. Her jeans were now wet, her jumper soaked and even her hair. There was an all-pervading smell of wet dog in the house and some of it, she realised, was now coming from her. Finally, she gave up. He still wasn’t completely dry, but at least he had stopped dripping. However, no sooner had she released him and stood up than he shook himself once more and she could still feel droplets landing on her.

Just at that moment, Stirling ran across to the door, tail wagging, and three seconds later, the doorbell rang. Holly went over and opened it to find Jack on the doorstep, getting wet. She motioned him inside. ‘Hi, come in. I’m terribly sorry, but this place, this animal and I all stink to high heaven.’

He came in as instructed, shaking raindrops from his arms and shoulders as he did so. He gave her a broad smile. ‘Smell? I can’t smell a thing apart from that haunting perfume you’re wearing.’

‘Eau du dog, I think you’ll find it’s called. I’m just about to make tea, if you can stand the smell and the mess.’

‘I don’t want to interrupt. I just came round to thank you for the amazing wine. There was no need for that.’ He crouched down on his heels and stroked the dog as she went over to fill the kettle. Out of the corner of her eye, she watched him. He had strong arms, broad shoulders and, squatting down, his jeans were really rather tight-fitting. Once again she found herself surprised to be feeling attraction, if that was what this was, to somebody so different from her normal choice of man. Jack was scruffy, Jack was an outdoor type and, putting it bluntly, he wasn’t exactly as well off as most of her men had been. Hastily, she busied herself with the teapot. 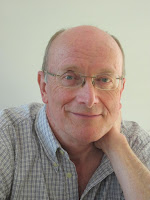 Firstly, my name isn’t T A. It’s Trevor. I write under the androgynous name T A Williams because 65% of books are read by women. In my first book, “Dirty Minds” one of the (female) characters suggests the imbalance is due to the fact that men spend too much time getting drunk and watching football. I couldn’t possibly comment. Ask my wife…

I’ve written all sorts: thrillers, historical novels, short stories and now I’m enjoying myself hugely writing humour and romance. Romantic comedies are what we all need from time to time. Life isn’t always very fair. It isn’t always a lot of fun, but when it is, we need to embrace it. If my books can put a smile on your face and maybe give your heartstrings a tug, then I know I’ve done my job.

I‘ve lived all over Europe, but now I live in a little village in sleepy Devon, tucked away in south west England. I love the place. That’s why you’ll find leafy lanes and thatched cottages in most of my books. Oh, yes, and a black Labrador.

I’ve been writing since I was 14 and that is half a century ago. However, underneath this bald, wrinkly exterior, there beats the heart of a youngster. My wife is convinced I will never grow up. I hope she’s right.

That Holiday In France – Rhoda Baxter

A Wedding at the Beach Hut – Veronica Henry