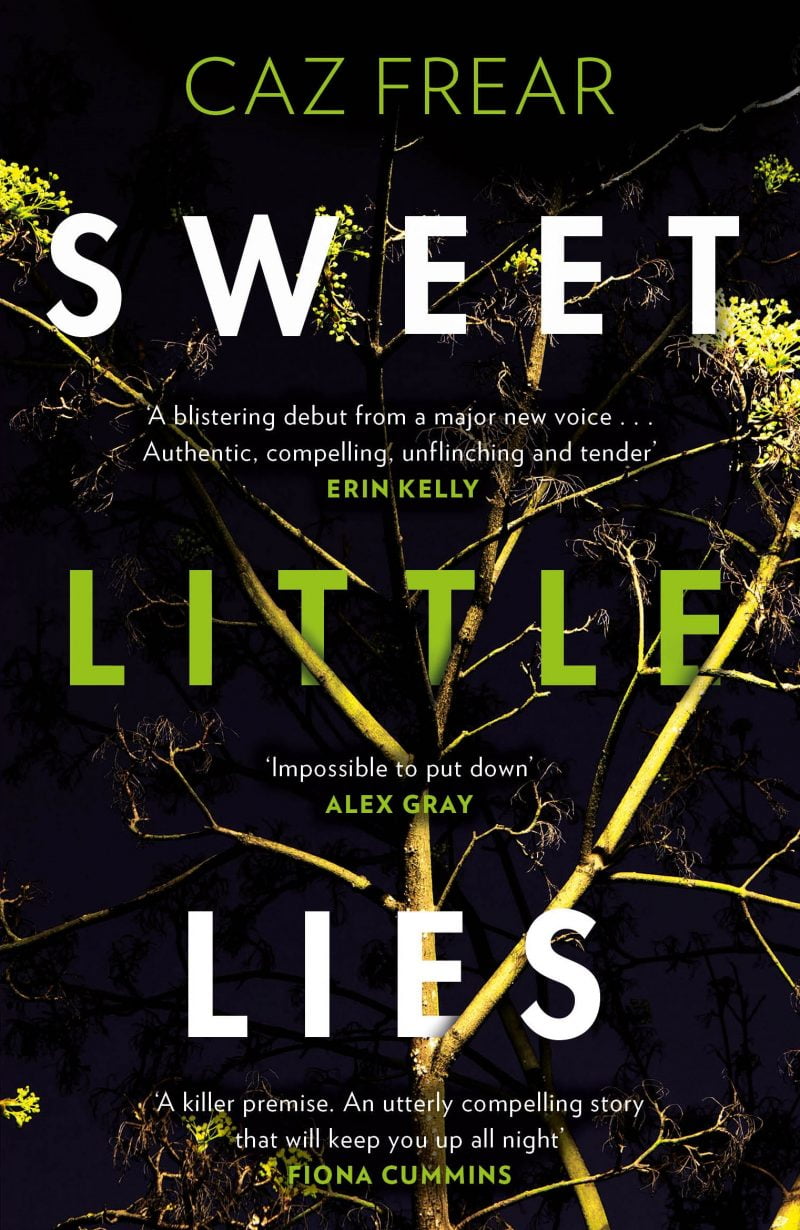 Sweet Little Lies is Caz Frear’s debut novel and the winner of the ‘Richard and Judy Search for a Bestseller Competition’.  For my turn on the last day of the blog tour Caz has answered a few questions. I also have a giveaway for a paperback copy, details of how to enter are at the end of the post.

It’s a pleasure to welcome you to the blog Caz, would you please introduce yourself and tell us a little about your background?

Lovely to be here and thanks for having me! I’m Caz and I’m the winner of the Richard & Judy Search for a Bestseller competition 2017. My novel Sweet Little Lies was published at the end of June and life has been turned wonderfully upside down ever since. Prior to writing full-time, I had a few different careers but I’d spent the past ten years or so working as a headhunter in the City of London which has been helpful for my writing, believe it or not! Over the years, I must have interviewed a couple of thousand people and it’s certainly helped with characterization!

Without giving away too much information, can you please tell us a little about your debut crime thriller, Sweet Little Lies. Where did the inspiration for the story come from?

Sweet Little Lies tells the story of DC Cat Kinsella, a young detective with the Met, who starts to believe that her father may be involved in both the murder she’s investigating and the disappearance of an Irish teenager in 1998. It’s very much a police procedural at heart however it has strong domestic/family noir overtones as Cat struggles to balance her professional responsibilities and her personal allegiances.

I honestly can’t remember where the inspiration first came from! Cat (and Maryanne’s) story just seemed to grow organically over time. I’d always had a strong image in my head of a pregnant Irish teenager boarding the boat to Holyhead for an abortion – I just thought that it was such an immensely vulnerable position to be in at that age and, of course, with vulnerability comes danger. I’d also always wanted to write a police procedural (the genre’s my real passion) and to cap that off, I felt that the dad-and-daughter dynamic hadn’t been as explored as the mother-and-daughter one……and then all these things eventually came together (after a few false starts) to form Sweet Little Lies!

Congratulations on winning this year’s Richard and Judy ‘Search for a Bestseller’ competition with Sweet Little Lies. The prize has won you a publishing contract with Bonnier Zaffre. What were your thoughts when you were announced as the winner and was this the first award that you had won for your writing?

Yes, this was the first award I’d won for anything! Not too shabby, eh 🙂 My actual first thought as soon as I put the phone down was that I needed to cancel my yoga class so I could go out and get completely obliterated on champagne 🙂  It’s funny how your mind works – rather than focusing on the achievement, I just thought about who to call and how to celebrate and it was definitely twenty-four hours before it properly sank in. Ultimately it was just such a strange feeling – euphoria mixed with relief. I’d been talking about writing a book, and getting published, for so long that I think I’d bored people to tears with my pipe-dream and therefore it was such a relief to be finally able to say, “I’ve won! I wasn’t delusional! Honestly, I’m actually quite good!”

What does a typical day look like for you and how do you find time to write?

I’m lucky enough to write full-time now although it’s a relatively recent development so I’m still trying to work out my typical day. Generally, my husband drops me at the gym on his way to work and I flog myself there for 30-40 mins before fleeing the place – I’m not a natural gym bunny but when your job involves sitting on the sofa for long stretches, you have to counter it somehow! Once I’m back from the gym, I’ll eat breakfast, mooch about on social media etc and then I try to start work by 9ish. I’ve lived such a 9-5 life in my previous careers that I’m aiming to repeat that routine in my new one – work until lunch, have an hour or so off, get back to the manuscript again until teatime. That’s the plan though – ask me in another few months!

How did you plan/research your books? Do you plot in detail or just see where the story takes you?

I’m a definite planner and I use Excel as much as Word in the early stages of writing – it helps me track who’s in which scene, whether the red herrings are evenly paced, whether there’s too much ‘personal’ stuff and not enough procedural etc. I also write up really thorough chapter plans before I even think of starting the first draft. I should add, I don’t always stick to these plans – there were a few twists and turns in Sweet Little Lies that seemed to come out of nowhere – but I definitely need a detailed plan to refer to. I find it hard to get going if I can’t see where I’ll end up and I’m majorly in awe of writers who can just start with a character or a ‘what if?’ and see where things lead.

What is the best writing advice that you have received? And what advice would you give to anyone trying to get their novel published? Is there anything that you wished you had done differently?

The best advice I’ve received is to make sure that every word earns it’s space and don’t be afraid to press delete! It’s easy to overwrite, especially in your first draft, but ultimately your job is to make yourself clear and understood, not to drown the reader in words (even if they’re beautiful words!)

In terms of the advice I’d give to anyone trying to get published….mmmm…..probably to always bear the reader in mind. Keep asking yourself ‘is this making them want to read on?’ That doesn’t mean you have to have a cliff-hanger at the end of every scene (although feel free!) but you need to have something that makes the reader want to keep moving forward. You may want to spend ages building atmosphere or describing the way the sunlight hit a blade of grass, but is that what the narrative needs at that moment? Think what the reader needs, not what you want to write.

I can’t honestly say that I wish I’d done anything differently as everything has worked out wonderfully 🙂 but I used to be a bit of an ‘edit-as-you-go’ fiend which meant I’d spend days perfecting the same paragraph – not exactly great for productivity! While I’m tonnes better now (I have to be – I have deadlines!), I do wish I’d trained myself to just forge ahead years ago and then maybe I wouldn’t still be fighting the urge to edit-as-I-go now!

Is there any part of the writing process which you enjoy (or find the most difficult) – i.e. researching, writing, editing?

I love researching but I’m conscious of losing myself in the research sometimes – I had to remind myself a few times with Sweet Little Lies that I wasn’t writing a Police Murder Investigation Manual, I was writing fiction!

I definitely find the first draft the hardest part – I find it quite psychologically draining because you have to keep ploughing on, even though nothing is coming out they way you want it to, and you just have to hope that all will come good in the second draft. I find the second draft much more pleasurable and I absolutely adore editing – it suits my perfectionist tendencies 🙂

Do you have any favourite books or authors which may have inspired you? What type of book do you enjoy reading for pleasure, and what are you reading now?

I’m about a third of the way into Susie Steiner’s, Persons Unknown and I’m loving it (as I fully expected to!) I am guilty of sticking quite closely to the crime/mystery/thriller space in terms of my own reading, however I do branch out when something is strongly recommended to me. Two of my favourite books of all time are from a completely different genre – The Shock of the Fall by Nathan Filer and Rachel’s Holiday by Marian Keyes – so I guess that shows that I should branch out more often!

When you’re not working or writing, what do you do to relax?

I read – it feels so good to get out of your own story and immerse yourself in someone else’s world for a while. And I do a fair amount of yoga and running which makes me sound really healthy but I do more than a fair amount of wine-drinking and crisp-eating too (generally in front of the football – I’m a fanatic.)

If you could take 3 books to a desert island, which ones would it be and why

I think I may have answered that a few questions ago, more or less!

Rachel’s Holiday, by Marian Keyes. Because I haven’t actually read it in ages and it would be fab falling in love all over again.

The Shock of the Fall, by Nathan Filer. Because it’s such an uplifting, heartwarming story, despite being a desperately sad premise. I reckon on a desert island you’d need a reminder of the strength of the human spirit and this amazing book definitely does that.

I’m really struggling between The Red Dahlia by Lynda La Plante and In the Woods by Tana French. I’ll go with In the Woods simply because it’s a whopper of a book (it must be c150,000 words) so it would keep me entertained for longer!

WHAT I THOUGHT I KNEW

WHAT I ACTUALLY KNOW

In 1998, Dad lied about knowing Maryanne Doyle.
Alice Lapaine has been found strangled near Dad’s pub.
Dad was in the local area for both Maryanne Doyle’s disappearance and Alice Lapaine’s murder – FACT
Connection?

FOR FANS OF ERIN KELLY AND BELINDA BAUER, GET READY FOR THE SUSPENSE NOVEL OF THE YEAR. 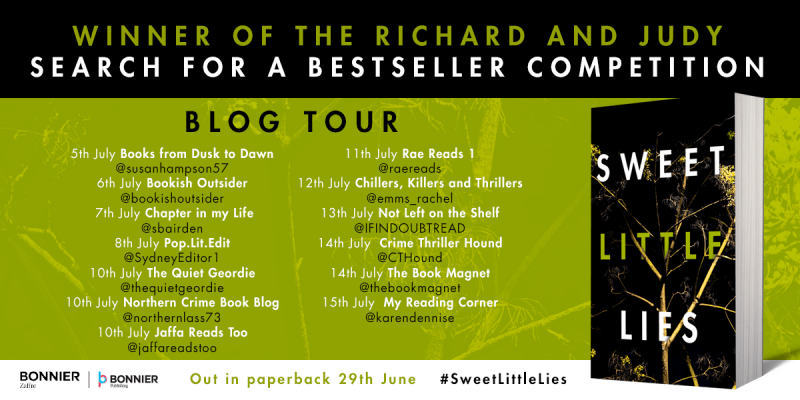 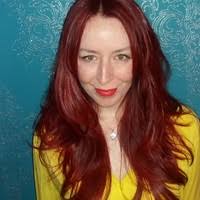 Caz grew up in Coventry and spent her teenage years dreaming of moving to London and writing a novel. After fulfilling her first dream, it wasn’t until she moved back to Coventry thirteen years later that the writing dream finally came true.
She has a first-class degree in History & Politics which she’s put to enormous use over the years by working as a waitress, a shop assistant, a retail merchandiser and, for the past twelve years, a headhunter. When she’s not agonising over snappy dialogue or incisive prose, she can be found shouting at the TV when Arsenal are playing or holding court in the pub on topics she knows nothing about.
Caz is the winner of the Richard & Judy Search for a Bestseller Award 2017.

Courtesy of the publisher, I have one paperback copy to give away.  Very sorry but entrants are restricted to the UK only.  Please enter using the Rafflecopter box below.  The giveaway will end by midnight on 20 July 2017. The winner will be notified by email and/or Twitter notification and will have 72 hours to provide their postal details in order that these can be passed to the publisher for the book despatch.  If details cannot be obtained an alternative winner will be selected.  Good luck!

Murder on the Downs – Julie Wassmer 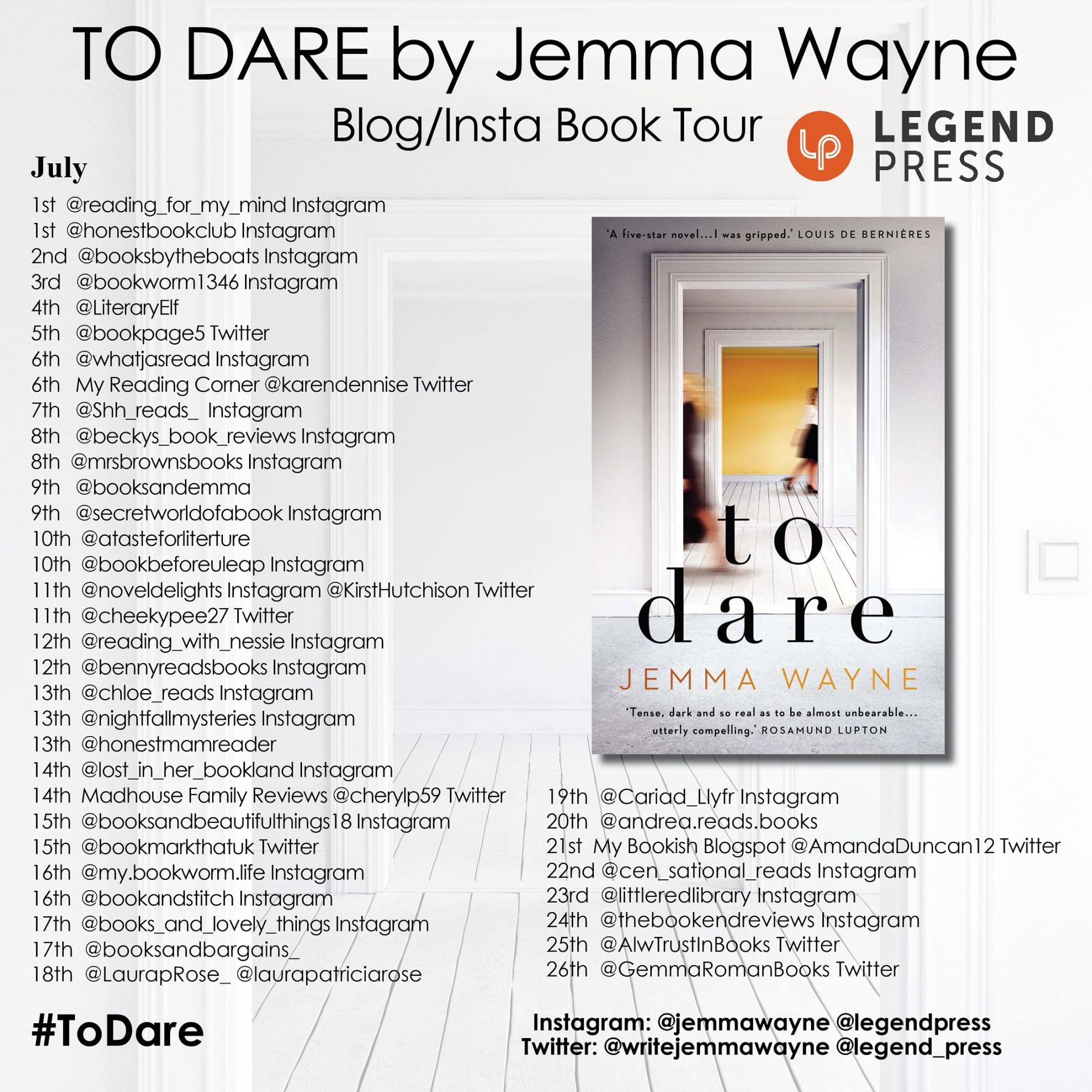 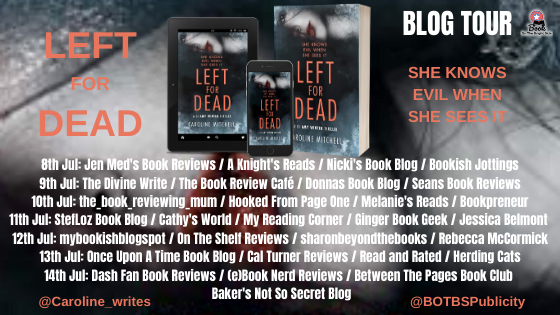 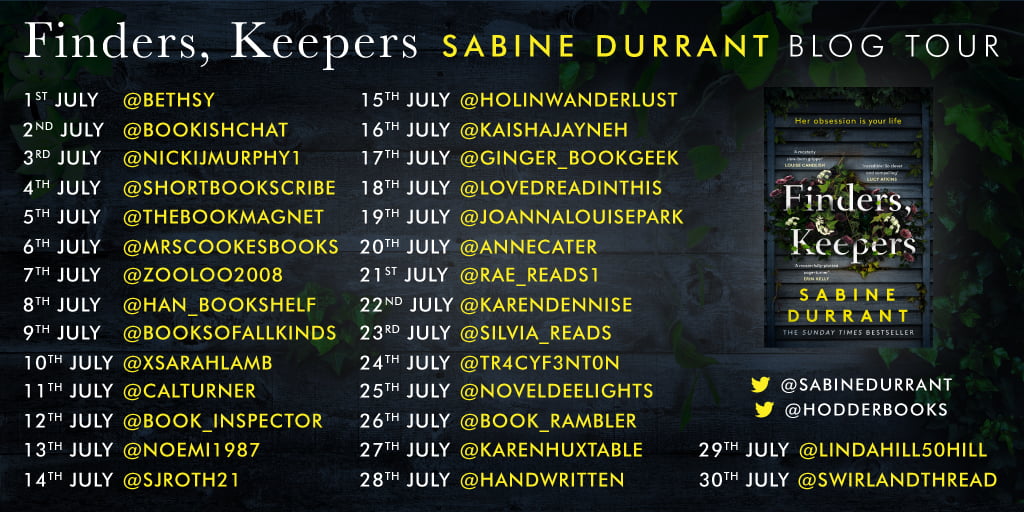 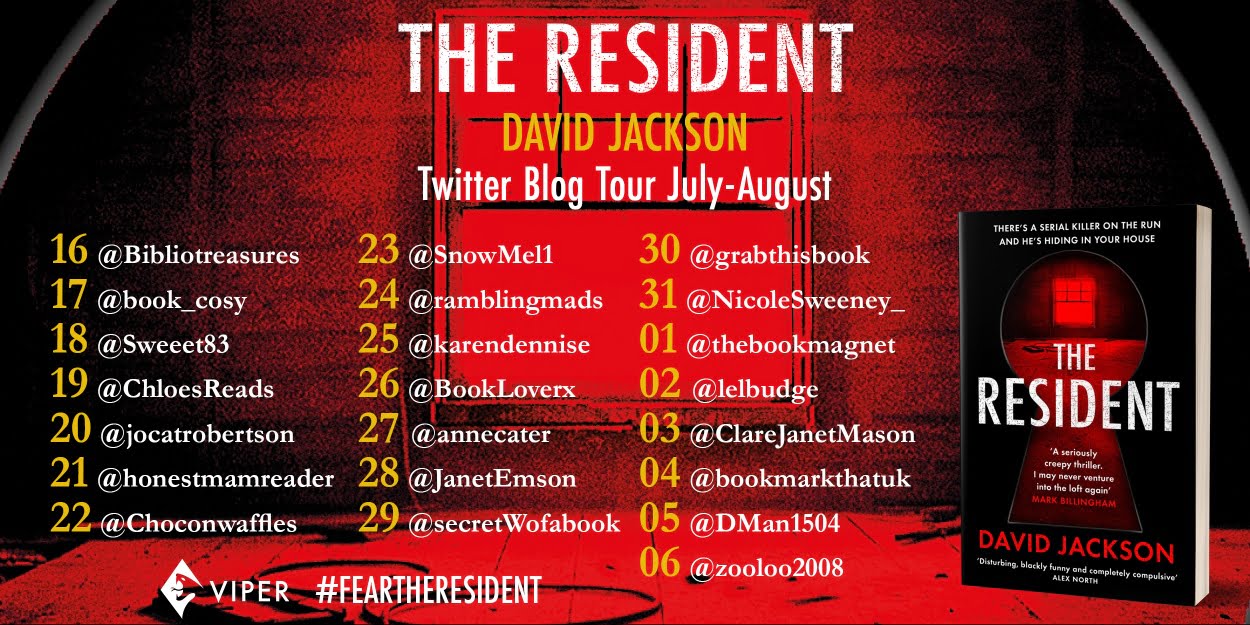 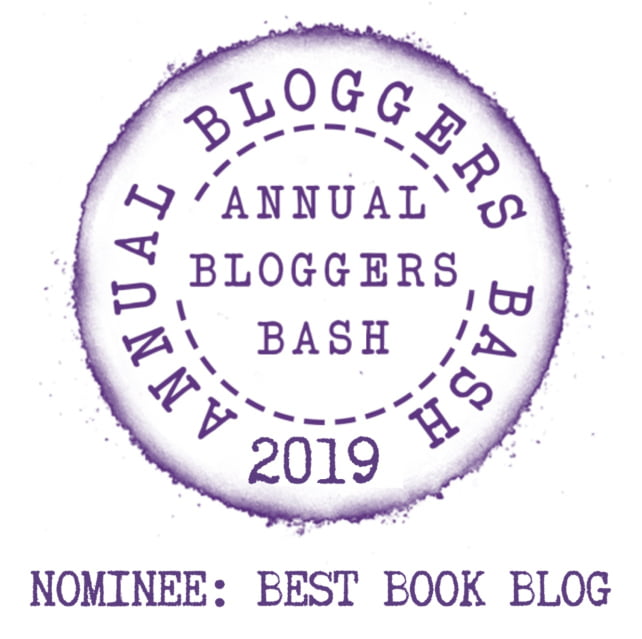