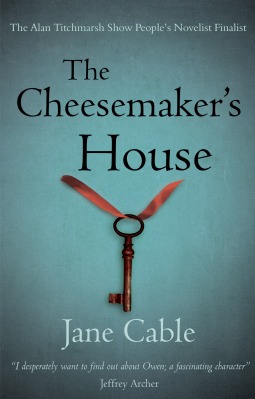 Inspired by a framed will found in her dream Yorkshire house, which had been built at the request of the village cheesemaker in 1726, Jane Cable discovered the historical aspect of her novel. Set near Northallerton in North Yorkshire, The Cheesemaker’s House is a page-turner that will have readers hooked instantly.

The novel follows the life of Alice Hart, who escapes to the North Yorkshire countryside to recover after her husband runs off with his secretary. Battling with loneliness but trying to make the best of her new start, she soon meets her neighbours, including handsome builder Richard Wainwright and kind café owner Owen Maltby. As Alice employs Richard to start renovating the barn next to her house, all is not what it seems. Why does she start seeing Owen when he clearly isn’t there? Where – or when – does the strange crying come from? And if Owen is the village ‘charmer’, what exactly does that mean?

Cable’s characters are shrouded in mystery, particularly Owen, who had been in her head from the summer of 2008. Her father had an interest in folklore and she discovered ‘charmers’ in a book from his extensive library. Around the same time she created Alice through a short piece of fiction which became the original opening of the novel, and the rest of the story simply fell into place.

The Cheesemaker’s House won the Suspense & Crime category of The Alan Titchmarsh Show’s People’s Novelist competition, reaching the last four out of over a thousand entries.


With so many reviews praising this book, and especially it being a competition winner, I had high expectations of this – and I’m so pleased to say I wasn’t disappointed.

When newly divorced, 35 year old Alice Hart, moves into New Cottage in Northallerton with her spaniel William, to pick up the pieces of her life, she can have no idea of the dramatic events that will follow.

There are some wonderful characters here, all so expertly drawn against a backdrop of the Yorkshire countryside which is beautifully described and I was pulled into the story from the start. The enigmatic Owen Maltby, who along with Adam (the baker) is the co-owner of Café Bianco. Owen, whilst being a kind and caring character, has secrets of his own. The tall, dark and handsome (and doesn’t he know it!) builder, Richard Wainwright who is employed by Alice to renovate her barn has a cheeky manner but we later see a sensitive side too. Her elderly neighbour Margaret, who with her sensible advice becomes a good friend to Alice. Alice, who of course, is central to the story, was somebody that I could identify and engage with – she has doubts and insecurities but is also capable of surprising strength when needed.

When Alice is kept awake at night by the sound of crying together with visions of ghostly images, she decides to delve deeper into the history of New Cottage and its previous inhabitants and with the help of Margaret, unearths some deeply disturbing information. When Richard discovers something even more sinister, events are set in motion that will test Alice and Owen to the limit.

I love books that are mixture of genres and a little bit different and this one certainly doesn’t fit the usual format. Its part love story, part ghost story with an element of mystery and all three combinations made it a book that I couldn’t put down.

I would love to read more by this very talented author.

I couldn’t end this review without giving a mention to Adam and his delicious sounding cakes – this is the perfect read to accompany a hot chocolate and a large slice of something very calorific!

My thanks to Netgalley and the publisher Troubador Publishing for the digital copy to review.