Not Without You – Harriet Evans 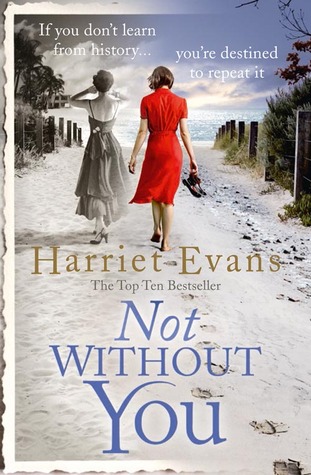 If you don’t learn from history . . .
You’re destined to repeat it

Not without you, she’d said. And I’d let her down…

Hollywood, 1961: when beautiful, much-loved movie star Eve Noel vanishes at the height of her fame, no-one knows where, much less why.

Fifty years later, another young British actress, Sophie Leigh, lives in Eve’s house high in the Hollywood Hills. Eve Noel was her inspiration and Sophie, disenchanted with her life in LA, finds herself becoming increasingly obsessed with the mystery of her idol’s disappearance. And the more she finds out, the more she realises Eve’s life is linked with her own.

As Eve’s tragic past and the present start to collide, Sophie needs to unravel the truth to save them both – but is she already too late? Becoming increasingly entangled in Eve’s world, Sophie must decide whose life she is really living . . .

“….Hollywood is about extremes, as someone once said. You’re either a success or a failure, there’s no in-between”.

In the current day, thirty year old Sophie Leigh has gone from England to Hollywood to seek fame and fortune.

– both women will find themselves sucked in and chewed up by the vicious film industry.

We first meet Eve, when she is 6 years old and playing with her older sister Rose in their English garden but then Rose accidentally drowns and Eve’s life will never be the same again. It is then the 1950’s and Eve is 20 years old when she makes her way to California to find stardom and fame and she really is an innocent abroad. In the days when young starlets were chaperoned to parties to meet the film producers who would decide their fate, the Hollywood machine wastes no time in getting its claws into people like Eve. Lecherous studio bosses and their spies do their very best to make young girls like Eve jump through hoops to keep their career not caring what the consequences may be.

Sophie Leigh (actually Sophie Sykes) is nearly 30. She too has gone from England to America to be a film star. We are now in the present day and really things don’t seem to have changed much. The studios don’t seem to have quite so much control over their star’s lives although they can still make and break careers with dirty tricks and the wrong word here and there.

Sophie has made her name playing ditzy characters in rom-coms. However, with her career on the downward slide, she now wants to do more than act in the third rate film scripts that come her way. She is also obsessed with the 1950’s actress Eve Noel, and even lives in Eve’s old Hollywood house. Sophie’s dream is to make a film about Eve’s life…and have Eve Noel appear in it. However no-one knows what has happened to Eve. In 1961, she suddenly disappeared and has never been heard of again.

This book turned out to be a much deeper and darker read than I was expecting. We see through Sophie’s eyes how fickle fame and fortune is and what happens when your fans…and indeed, people you thought were friends, turn against you. It seemed to me that a lot of research had gone into the book, especially in the lifestyle and practices of the moviemakers and the film studios of decades ago and this gave an extra element to the story.

The story travels back and forth from the US to the English countryside, and you get a real feeling for location. The characters are well written, some are likeable and others definitely not, however they each pull you in to the story. Sophie as the main character, was interesting enough to carry the story, however I found myself drawn to Eve and her life and for me she was the real star of the book.

There is a sub plot involving Sophie which led to a dramatic scene which I really was not expecting, and this change of tone makes the book different from previous books that I’ve read by Harriet Evans.

It’s difficult to say any more without giving the plot away but I really enjoyed this story and would recommend it if you’re looking for a read with a little more substance.

Finally, I just have to say that I adored the gorgeous cover of this book and whoever designed it should take a bow.

My thanks to the publisher Harper Collins for the copy to review.

2 thoughts on “Not Without You – Harriet Evans”