This Child of Mine – Sinead Moriarty 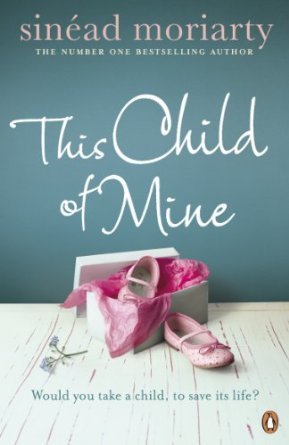 Published in September 2013 by Penguin

Anna and Laura, Sophie and Mandy – two mothers, two daughters and a story about the bond of motherly love.

Anna is proud of the job she has done raising eighteen-year-old Sophie. It’s always been just the two of them, but that doesn’t matter because Sophie has everything she could ever need.

It’s a miracle that Laura’s daughter Mandy is as happy as she is, considering that Laura remains haunted by the loss of her first child before Mandy was born.

Both women carry painful secrets and can never forget the day their paths crossed. But a chance discovery is about to bring everything into the open, and mothers and daughters, love and lies, past and future, will spectacularly collide…

I haven’t read any of Sinéad’s books before so when Catherine of Penguin Ireland kindly asked me if I would like to review this, I jumped at the chance.

This is the story of two mothers – Laura and Anna, and their daughters. One woman had suffered more than her share of tragedy and the other was a teenager lacking any sense of responsibility and seeing her baby as a burden rather than a joy.

We then move forward 20 years or so and discover the devastating consequences of one woman’s actions. Much heartache and grief has been caused in the intervening years and now someone has to be held to account.

I don’t want to give too much of the story away as it is one you need to discover for yourself but I was gripped by this book from the very start and by the end, felt as if I had been on an emotional rollercoaster. The characters are so well developed and although they are not all likeable, they all have a strong voice. I didn’t want to like either Laura or Anna, but I couldn’t help but feel sympathy for them when the secrets of the past finally came to light. Laura and Anna apart, there are many wonderful characters here, including Sophie, whose life is suddenly torn apart. Her friend Holly, a typical teen but loyal to the end and then there is Lexie. On reflection, Lexie was my favourite character – she may have been cast as the stereotypical WAG but she had a heart of gold and became a true friend. Mandy was a typical moody angst ridden teenager and although I really disliked her at times, I did feel a bit sorry for her at the way her life had suddenly changed.

Sinéad has dealt expertly with this emotional and controversial subject; there is humour as well as heartbreak and there are times when the desire to shake a character and bring them to their senses is just overwhelming. This story will draw you in and won’t let go until the very last page.

My thanks to Penguin Ireland for the copy to review.

1 thought on “This Child of Mine – Sinead Moriarty”