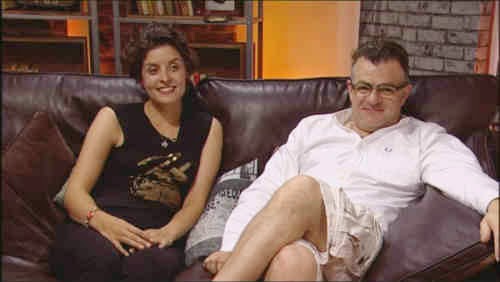 Log on during your lunch hour for the sixth of ten monthly shows where author Alexandra Heminsley is joined by Jessie Burton and Jonathan Harvey who will be talking about their new books and we’ll be talking all things summer reads with industry insiders.

In episode six of BOOK BREAK, anchored by author Alexandra Heminsley (Running Like a Girl), we are joined by Jessie Burton, an actress and debut novelist and Jonathan Harvey, the creator of Gimme Gimme Gimme, one of the star writers on Coronation Street and already an award-winning novelist.

Jonathan Harvey’s The Girl Who Just Appeared is a poignant, funny read which follows Holly (who was adopted as an infant) in the present day and Darren (who is negotiating life with his errant mother and the younger brother he is bringing up) in 1981. Flitting between the present and the past we gradually discover how Darren and Holly’s lives become intertwined.

Jessie Burton’s debut, The Miniaturist, is a story of love and obsession, betrayal and retribution, appearance and truth set in 1686 in the home of the illustrious merchant trader Johannes Brandt, told through the eyes of his new bride Nella.

We’ll also hear from Ellen Feldman in our writer’s room segment where we’ll delve into her writing rituals. Finishing off being transported to an industry party, we’ll hear from publishing insiders on their recommendations for summer reading- from those already on the shelves to books that haven’t even been published yet.

Alexandra Heminsley is joined by Jessie Burton and Jonathan Harvey for Book Break which will be broadcast on Friday 4th July 12:30pm at http://www.studiotalk.tv/show/book-break-6