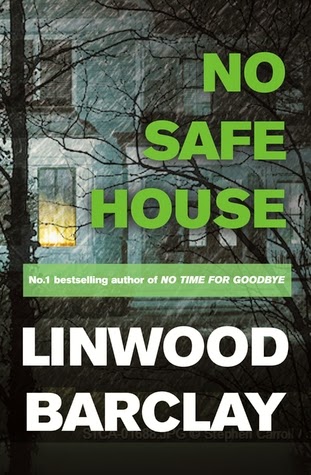 The sequel to the Sunday Times No.1 Bestseller No Time for Goodbye

Seven years ago, Terry Archer and his family experienced a horrific ordeal that nearly cost them their lives. Today, the echoes of that fateful night are still audible. Terry’s wife, Cynthia, is living separate from her husband and daughter after her own personal demons threatened to ruin her relationship with them permanently. Their daughter, Grace, is rebelling against her parents’ seemingly needless overprotection. Terry is just trying to keep his family together. And the entire town is reeling from the senseless murder of two elderly locals.

But when Grace foolishly follows her delinquent boyfriend into a strange house, the Archers must do more than stay together. They must stay alive. Because now they have all been unwillingly drawn into the shadowy depths of their seemingly idyllic hometown.

For there, they will be reconnected with the man who saved their lives seven years ago, but who still remains a ruthless, unrepentant criminal. They will encounter killers for hire working all sides. And they will learn that there are some things people value much more than money, and will do anything to get it.

Caught in a labyrinth between family loyalty and ultimate betrayal, Terry must find a way to extricate his family from a lethal situation he still doesn’t fully comprehend. All he knows is that to live, he may have to do the unthinkable….

No Time for Goodbye was my very first Linwood Barclay book back in 2008 and I loved it – so much so that I have read every single book of his ever since.  No Safe House catches up the Archer family 7 years later and I couldn’t wait to read it.

You don’t need to have read No Time for Goodbye as there is enough back story here to give you the gist of the previous story without going into too much detail, however I would recommend that you do read it as not only is it such a good book, but you get to know the characters.  If I’d had time, I would have re-read it before reading this, as I had forgotten some of the finer plot details and minor characters which re-appear here.

The Archer family are still trying to deal with the fallout from their ordeal 7 years before.   Daughter Grace is now 14 years old and is trying to be a normal independent teenager however her mother Cynthia, still fearful of past events, is over protective and Grace feels suffocated and frustrated. When feelings reach boiling point, Cynthia decides to put some distance between them for a while and moves out to a rented apartment, where she becomes re-acquainted with Vince Fleming, a career criminal from her past.  Grace then makes a bad decision which puts her family in danger and sees her father Terry having to deal with the consequences. Running alongside is a separate thread of murder and a hunt for something or someone unknown. This side of the story seemed rather disjointed at first and although the threads do come together, there were some parts, particularly the telephone conversations, that I found annoying.

I was so looking forward to this sequel but was left feeling disappointed. So, where did it all go wrong?  I’m all for escapism but I felt I was being asked to suspend belief just a little too far with this story.  Terry Archer was an ordinary law abiding teacher and one of Barclay’s typical ‘normal family guy’ types who can get into bad situations by being in the wrong place at the wrong time.  He was my favourite character in the previous book but I didn’t feel the same this time.  With this story, I can accept that Terry was trying to protect his family but even so, some of his decisions (and Cynthia’s too at times) were just too stupid and seemed totally out of character.

Although there were plenty of the trademark Barclay twists and turns, there was too much of a comedic feel and the nail-biting tension and skilful plotting that I am used to with his previous books was missing for me.

It’s certainly not a bad book (I felt the second half had more pace than the first) but it’s not one of my favourites. I normally race through his books as I can’t put them down but I struggled with this one and it was rather a lacklustre read for me. Having said that, he still remains one of my favourite authors and I still want to read whatever he writes but please Mr Barclay, go back to the thrills and tension of your earlier novels.


My thanks to Netgalley and the Publisher for the e-copy to review.

After writing four comic thrillers featuring the character Zack Walker, Linwood turned to darker, standalone novels, starting with No Time for Goodbye, which became an international hit. The novel has been translated into nearly forty languages, was the single bestselling novel in the UK in 2008, and has been optioned for film by Eric McCormack. Since then, all of Linwood’s novels have appeared on bestseller lists, and more his books have been optioned.