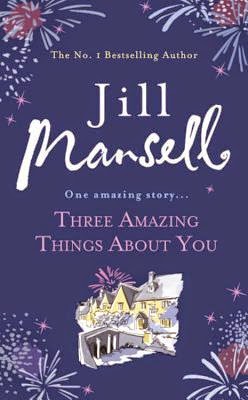 Hallie has a secret. She’s in love. He’s perfect for her in every way, but he’s seriously out of bounds. And her friends aren’t going to help her because what they do know is that Hallie doesn’t have long to live. Time is running out…

Flo has a dilemma. She really likes Zander. But his scary sister won’t be even faintly amused if she thinks Zander and Flo are becoming friends – let alone anything more.

Tasha has a problem. Her new boyfriend is the adventurous type. And she’s afraid one of his adventures will go badly wrong.

THREE AMAZING THINGS ABOUT YOU begins as Hallie goes on a journey. A donor has been found and she’s about to be given new lungs. But whose?

This is the third Jill Mansell book that I have included on this blog and I have made no secret of the fact that she is one of my favourite authors. I love whatever she writes and this, her 26th novel, is one of her best.

It is the story of three young women, all are strangers to each other but the way their lives connect and collide is one of the joys of the book. With the exception of one (and you will soon realise who that is!), all the characters are extremely engaging and likeable and the type of people that you could happily be friends with.

At the very beginning, we meet 28 year old Hallie when she is on her way to the hospital, excited but extremely scared at what is to come. Hallie has had THE phone call from her transplant coordinator. Hallie has cystic fibrosis and despite being confined to a wheelchair with an accompanying oxygen tank most of the time, she is upbeat, funny, kind and … in love, although the object of her desire doesn’t know it. Hallie is well aware that she may not have much time left unless a donor organ can be found. She also runs a website called ‘Three Things About You’, where those writing in for advice first have to list three facts about themselves. The advice that Hallie gave was a good insight to her character – she may have been seriously ill but she didn’t take any prisoners!

Tasha (otherwise known as ‘Bin Girl’ – this scene was just wonderful and had me grimacing and grinning in equal measures) has had that love at first sight experience. However she and her new boyfriend are completely different – he is an adrenaline junkie whilst she has no desire whatsoever to take part in extreme sports. Can their love really last despite their differences?

Flo, has become guardian to Jeremy, a very grumpy cat, who comes with his own accommodation. Flo loves her job in a retirement home and the interaction between her and her residents, particularly Margo, is wonderfully crafted. However, when she meets a new man, she encounters trouble from someone who seriously objects to her romance.

I loved this book. It had me laughing one minute and then almost crying the next. It deals with some difficult subjects – serious illness and the importance of organ donation but it never preaches and although at times it is an emotional read, it is also uplifting and joyous and is written with sensitivity and warmth. Even the friends and supporting characters had their own distinct personalities and were certainly a great addition to the story. Tasha’s best friend Carmel and Rory’s best mate Joe were just wonderful and the sparky dialogue between them worked so well.

At a certain point of the book, I thought I knew where the story was headed but there are little twists to keep you on your toes. By the time I got to the end my emotions had been through the wringer but it was a lovely journey and this book is deservedly another triumph for Jill Mansell.


Don’t just take my word for it, do take a look at these other great reviews from my blogger friends at Being Anne and Random Things Through My Letterbox.

My thanks to Netgalley and the publisher for the digital copy for review. 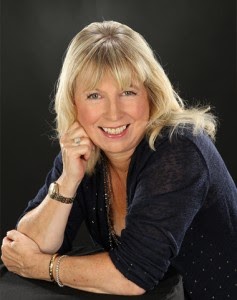 Jill Mansell lives with her partner and children in Bristol, and writes full time. Actually that’s not true; she watches TV, eats fruit gums, admires the rugby players training in the sports field behind her house, and spends hours on the internet Tweeting and marvelling at how many other writers have blogs. Only when she’s completely run out of displacement activities does she actually write.

2 thoughts on “Three Amazing Things About You – Jill Mansell”