A Place for Us – Harriet Evans 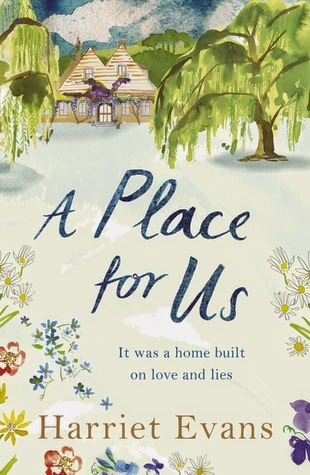 To be published 15 January 2015 by Headline Review

The day Martha Winter decided to tear apart her family began like any other day.

When Martha, a wife and mother of three, sits down one late summer’s morning to write out the invitations to her eightieth birthday celebration, she knows that what she is planning to reveal at the party could ruin the idyllic life she and her husband David have spent over fifty years building…

But she has to let her family know what she and David have sacrificed. She can’t live a lie any more.

The invitation goes out far and wide, calling her three children and their families back home to Winterfold, their rambling house in the heart of the English countryside. They are Bill, the doctor; Florence, the eccentric academic; and Daisy, the child who never fit in. As the story unfolds, each character reveals the secrets, joys, and tragedies they are wrestling with through the confines of the family. What will happen when Martha finally tells the truth?

This book has previously been published in 4 instalments during 2014. I was lucky enough to have been sent Part 1 back in the summer but because I prefer to read a book in one go, I resisted reading the other 3 parts until the whole book had been published.

The story begins in the summer of 2012 when the matriarch of the family, Martha Winter, sends out invitations to her family for her 80th birthday celebration, at which an “important announcement” will be made. The family are left wondering what is in store. With each chapter narrated by a different family member, we begin to get to know a little of their background and we learn why some chose to move away. Although necessary, this slowed the story slightly whilst the family were being introduced. Even at this stage, secrets are hinted at and the drama is building.

There are several family members to get to know and I’m actually glad that I read the first part twice because on the second reading, it was easier to understand the relationships. There are children and grandchildren and initially I frequently mixed up the characters.

Martha and her husband David (also known as ‘Southpaw’) are both artists and when they first scraped together the money to buy Winterfold, they had a vision of raising their family there and of the house offering happiness and a place of refuge for their extending family. Sadly this dream didn’t quite go to plan and they watched their family fracture and disintegrate.

This is a story of a family life built on secrets and lies. We are taken back in time to WW2 when David was just a boy and living through the war in London and then forwards to different chapters in each character’s life. There were times when I found the jump in timelines a little confusing.

The three children are all very different. Bill, the eldest, is a GP and on his second marriage, to Karen, which is proving to be as unsuccessful a union as his first. Bill has a daughter, Lucy, from his first marriage. Then there is Daisy. Daisy was always the most troubled and problematic of the siblings. She ran away to help with a charity in India but left behind her daughter, Cat. Although Cat was very young when her mother left, she has some memories of Daisy and has felt her absence keenly as she has grown up. Finally, there is Florence. Florence was probably my favourite character; she was an academic/Professor of art and in lived in – Florence! She wasn’t graceful either in manner or looks but there was something endearing about her awkwardness and lack of social skills.

These people and their lives form the main part of this family drama. These are all the people that we get to know and when Martha plans to drop her bombshell, each of them will have to deal with the consequences.

I don’t want to give any spoilers so that is really all I can say about the story. Some of the characters are more likable than others and the house itself, ‘Winterfold’ sounded idyllic. For many years the Winters and Martha in particular, with her parties and gatherings, had presented this perfect image to outsiders of their family life, however in reality, this was far from the truth.

I did enjoy this family saga, even though at times I felt the story could have been a little shorter without losing anything. Harriet Evans has superbly captured the complexities and emotions of her characters and making them face up to the reality of their lives. Like them or not, the Winters will draw you into their world.

Harriet Evans is the author of seven previous novels, Going Home, A Hopeless Romantic, The Love of Her Life, I Remember You, Love Always, Happily Ever After and Not Without You. She lives in London with her family.