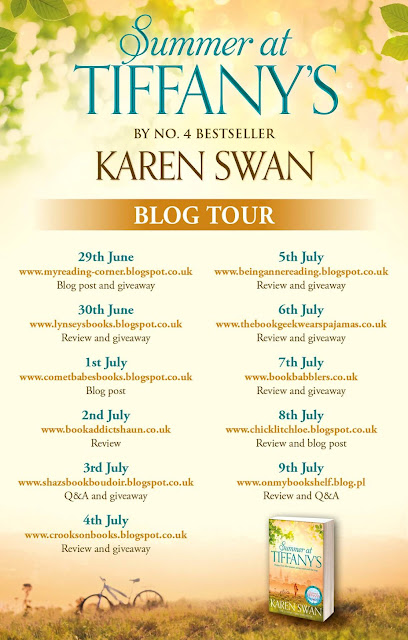 Summer at Tiffany’s is published by Macmillan.  Both paperback and Kindle versions will be published on 2 July 2015.

I’m delighted to be starting off the blog tour for Summer at Tiffany’s and now welcome Karen to the blog to tell you why she chose Cornwall as a setting for the book.

At the end of this post, there is a giveaway for 3 winners, each to win a paperback copy (sorry, but entries are restricted to UK only). The winners will receive their book direct from the publisher.

The tour finishes on 9 July – please do check out the other blog stops.

Why I love Cornwall and couldn’t resist partly setting the novel there.

Enid Blyton has a lot to answer for. Had I not been brought up on the Adventure Series and Mallory Towers, had I not read the entire box set of Famous Five to my own children, then perhaps all Cornwall would be to me is a scraggly-shaped landmass of black cliffs and treacherous seas, pasties and mermaid tales. But I did read those books, I absorbed them like sugar in the blood and it became for me a land of adventures, where smugglers’ tunnels squirrel far back into the cliffs, where pirates’ treasure is hidden in the gorse and salt-water lagoons are exposed by the tide. It’s wild and savage, unapologetically ungroomed and untidy. Is there any better antidote to modern life? I love the fact that you can’t drive down the lanes with your car windows open because the wildflowers would hit you in the face; I love that we have to hold our breath to get past the stinky farm to our favourite beach, or that in place of the rather prim, painted beach huts of other seasides, ancient little churches sit stoically in the sand dunes. (In fact, the church mentioned in the book, St Enodoc’s, was once buried by the sand.)

For me, retreat and renewal isn’t a marble palace in Dubai where I can get my nails done; it’s a chunky, rough lime-washed cottage with six foot-deep walls, granite lintels and a black slate floor. I want to climb over serpentine rock and run barefoot along grass-fringed sandy paths, I want the wind to whip my hair into knots and burn my cheeks so that I go home blown-through and giddy; I want to feel like a child again, care-free and guileless. I want texture and colour and to somehow physically grab hold of this piece of England which doesn’t prize the manicured and manufactured over the raw and fresh.

The very culture of the place is steeped in heritage and endurance, resilience and independence and given that in all my stories, my characters are – in various ways – being stripped back and rebuilt again, it’s an obvious and perfect setting. In this book, Cassie is forced to ask herself what she really wants, even though she’s supposedly already got her happy ending. Does she truly know herself or is she clinging to an idea of how she thinks life should be? Cornwall’s wildness and tempestuousness was a great metaphor for the passions and conflicts still lurking in her heart. 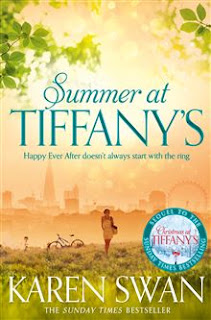 
Cassie loves Henry. Henry loves Cassie. With a Tiffany ring on her finger, all that Cassie has left to do is plan the wedding. It should be so simple but when Henry pushes for a date, Cassie pulls back.


Henry’s wild, young cousin, Gem, has no such hesitations and is racing to the aisle at a sprint, determined to marry in the Cornish church where her parents were wed. But the family is set against it, and Cassie resolves to stop the wedding from going ahead.


When Henry lands an expedition sailing the Pacific for the summer, Cassie decamps to Cornwall, hoping to find the peace of mind she needs to move forwards. But in the dunes and coves of the northern Cornish coast, she soon discovers the past isn’t finished with her yet? 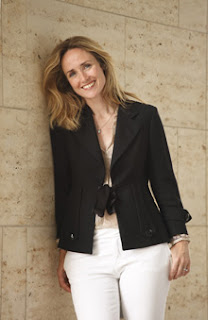 Karen Swan began her career in fashion journalism before giving it all up to raise her three children and an ADHD puppy, and to pursue her ambition of becoming a writer. She lives in the forest in Sussex, writing her books in a treehouse overlooking the Downs. Her first novel, Players, was published in 2010, followed by Prima Donna and Christmas at Tiffany’s in 2011.