A Very Big House in the Country – Claire Sandy 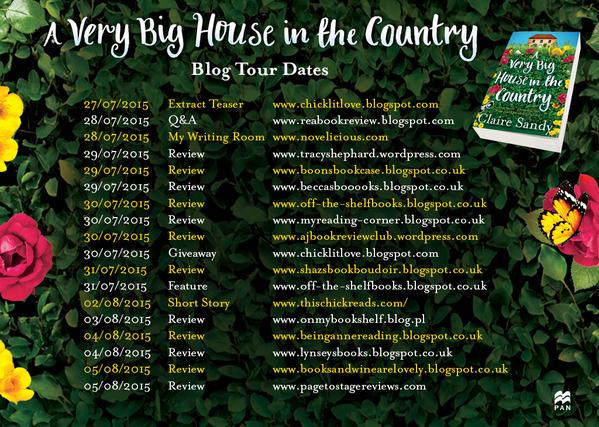 ‘Holidays are about surviving the gaps between one meal and another.’

For one long hot summer in Devon, three families are sharing one very big house in the country. The Herreras: made up of two tired parents, three grumbling children and one promiscuous dog; the Littles: he’s loaded (despite two divorces and five kids), she’s gorgeous, but maybe the equation for a truly happy marriage is a bit more complicated than that; and the Browns, who seem oddly jumpy around people, but especially each other.

By the pool, new friendships blossom; at the aga door, resentments begin to simmer. Secret crushes are formed and secret cigarettes cadged by the teens, as the adults loosen their inhibitions with litres of white wine and start to get perhaps a little too honest …

Mother hen to all, Evie Herreras has a life-changing announcement to make, one that could rock the foundations of her family. But will someone else beat her to it? 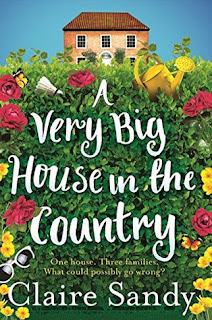 For most families, holidays are a time for rest and relaxation – but sadly I think someone forgot to tell the three families in Claire Sandy’s latest story.

When friends Shen Little and Evie Herreras (plus another couple Paula and Joe, who they only know very slightly) share a large luxurious house, Wellcome Manor, for a two week holiday, none of them can have any idea of the drama that will ensue along with secrets that will be disclosed.

Shen and Clive Ling-Little are the rich guys – Clive has buckets of money and Shen is his much younger third wife who doesn’t hold back on spending it. Their marriage appears to be more of a business arrangement than a true love match. Shen is very high maintenance and demands high standards of those around her – in fact she sounds quite exhausting to be around.

Evie and Mike are happily married, money is a bit tight and they’ve had their problems to deal with but they muddle along. Except that Evie knows something that Mike doesn’t.

The other couple Paula and Joe, are fairly new to the area and really were invited along to make up the numbers. Their children go the same school and Evie has always thought Paula a bit weird and certainly her behaviour confirms that impression. Paula was so jumpy and nervous that she put everybody on edge.

With three couples, several children and two dogs, this was never going to be a relaxing holiday. Family tensions, sulking children, adolescent hormones and secrets all add to the drama. Although much of the story is written as a funny read, there are subjects covered which are not so humorous and this gives the story that extra depth.

This was an entertaining and engaging read. All the characters come to life with their distinct personalities coming across and the descriptions of the Manor sound wonderful, I would love a holiday there myself. Mabel, the young daughter of Evie & Mike was adorable – with a mix of cuteness and precociousness, I wanted to adopt her! I loved the character of Evie, she was the rock of the family that held everyone together and was someone that would be a good friend.  There was much snorting and several laugh out loud moments from me – and some strange looks from others as I read this on the train.


My thanks to Francesca and the publisher for the e-copy to review and for the opportunity to take part in the tour. 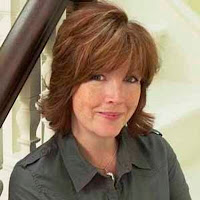 Claire Sandy lives in Surrey with a husband and a daughter and loves lots of things, such as baking, reading, writing, eating, chatting about matters of global importance with her nine year old, dressing up her dog and inventing new things to do with gin.