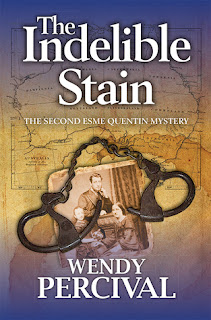 Secrets from a tainted past…

Esme Quentin’s arrival in north Devon is marred by the gruesome discovery of a fatally injured woman at the foot of Warren Cliff. Esme is troubled by the woman’s final words and curious about the old photograph clutched in her hand. The police, however, dismiss Bella Shaw’s death as accidental.

But Bella’s daughter, Neave, has her own questions and approaches Esme for help. The subsequent trail leads Esme back to the brutal penal history of 19th century England and the mystery of a Devon convict girl transported to Australia for her crime.

As evidence of betrayal and duplicity are revealed, Esme discovers Bella’s link to events in the past – a link which now endangers Neave and, by association, Esme.

A legacy of hatred which has festered for generations in the ‘land beyond the seas’ now threatens to spill over on to Devon soil with devastating consequences.

This is the second book in the Esme Quentin series (I read and reviewed the first, ‘Blood-Tied’ here last year).

Esme Quentin is a historical researcher with a past that hasn’t yet been fully explained.  I’m hoping that future books (if there are any, please Wendy?) will let us know more about this very interesting character.

In this story, Esme arrives in the historic port of Warren Quay, North Devon to help a friend to catalogue some documents for an exhibition. Almost immediately upon her arrival, the drama starts when she discovers a woman lying at the base of a cliff, clutching a photograph. Esme’s interest is piqued upon hearing the dying woman’s last words.

Intrigued by this, and not convinced that this was an accidental fall, Esme can’t help but become involved when the daughter of the dead woman, comes to her for help.  What follows is a story of murder, deceit, and betrayal across generations which at its heart concerns the history of convict transportation to Australia when both English and Irish convicts were transported on ships, in the most awful conditions, for what we would regard as petty theft.

The author herself has a great interest in genealogy and this is used to great effect to form a complex and intriguing mystery.  I do enjoy Wendy’s style of writing, she has a talent for fleshing out the characters and vividly describing locations and landscape. Esme is an extremely engaging and tenacious character, once she gets involved in something she just has to carry on digging deeper for answers, even if by doing so she puts herself in danger.

The intricate plotting makes for a very satisfying and interesting read. Whenever I thought I had it all worked out, a little twist would appear and I would be back to square one.  In the Author’s Note at the back of the book a web link is given to a family tree which is very helpful in explaining how the many characters are linked, however in order to avoid ‘spoiling’ the story, I would recommend that you look at this after you have read it.

If you like mysteries that are a little bit different (and especially if you have an interest in family history) then I can recommend this series.  I certainly do hope there is more to come from Esme in the future.

It’s not essential to have read the first book to enjoy this one (although I recommend that you do, if for no other reason than it is a very good story).  As with any series, it helps if you read them in order, but this can easily be read as a standalone.

My thanks to the author for the paperback copy to review (and for signing it, its now on my keeper’s shelf!). 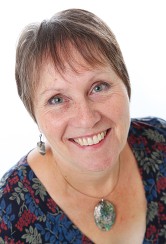 Wendy Percival was born in the West Midlands and grew up in rural Worcestershire. After training as a primary school teacher she moved to North Devon for her first teaching post, and remained in teaching for 20 years. An impulse buy of Writing Magazine prompted her to begin writing seriously. She won Writing Magazine’s 2002 Summer Ghost Story competition and had a short story published in The People’s Friend before focusing on full length fiction. The time honoured ‘box of old documents in the attic’ stirred her interest in genealogy, the inspiration behind her Esme Quentin novels. The Indelible Stain is the second in the series. The first, Blood-Tied, was published by SilverWood in 2013. Wendy lives in Devon, in a thatched cottage beside a 13th-century church with her husband and a particularly talkative cat.