Everytime A Bell Rings is Carmel Harrington’s third novel and published by HarperImpulse. The e-book was released on 15 October with the paperback being published on 19 November 2015.  I had this on pre-order for delivery to my Kindle yesterday and I’m looking forward to a festive read.

I’m delighted to welcome Carmel Harrington to My Reading Corner with a lovely guest post talking about her favourite childhood Christmas memory.  I hope you enjoy it. 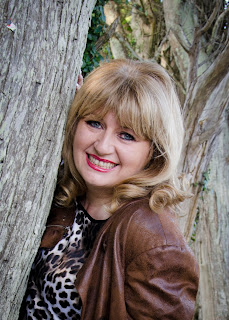 I’m one of four children. I have one older sister, Fiona and two younger, the twins John and Shelley. There is only two years between us all, so we grew up as firm friends. All of my childhood memories include my siblings and I’m so happy to say that my adult memories do too.

My parents, Tina and Michael both adore the festive season and always worked hard to make it special for us all. A lot of the reason why I adore Christmas so much, is because of the lovely memories I have from my childhood in Wexford.

If I were to chose my favourite memory from that time, I think I’d pick this one!

I think I was ten, so that would have made my sister Fiona eleven and the twins nine.
We decided, that this would be the year that we meet Santa Claus. We wanted to see him, touch him, hug him, thank him. I can still remember how delicious it felt, going to bed, knowing that we had a secret. We were going to get up, once mam and dad went to bed.

So we snuck into the good sitting room. Did you all have one of those too? Somewhere that was only opened for visiting relatives or royalty? But this was the room that had our open fire and we knew that it was also where Santa would appear.

So, stealthily, perhaps the quietest us four had ever been in our lives, we crept in, clutching our pillows and duvets with us. We could hear our parents chatting in the family room. Hushed voices and giggles echoing through the house as they did last minute Christmas Eve preparations.

We planned to stay awake all night. Easy peasy we thought, as all children think. So we lay, side by side in our makeshift beds on the ground, in front of the fire, eyes bright with excitement, that at last, we were going to meet the REAL Santa.

But soon, our eyes grew heavy and one by one we started to yawn. Shelley was the first to fall asleep, then John. Fiona and I looked at each other and nodded, a silent acknowledgement that we would fight the tiredness and stay alert. But of course, that was impossible and the next thing I knew it was morning.

Mammy and Daddy were standing in the doorway of the sitting room, big smiles on their faces. One by one we sat up, rubbing our sleepy eyes.

‘Look!’ Mammy shouted, pointing to the end of our tangled duvet covers.

And with amazement and joy we realised that Santa had been, while we were fast asleep.

‘Next year.’ I promised myself. ‘I’ll stay awake next year.’ 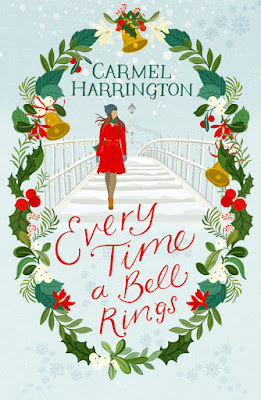 Every Time A Bell Rings  … an angel gets its wings…

Belle has taken all the Christmas decorations down. This year they won’t be celebrating. As foster parents, Belle and Jim have given many children the chance of a happier start in life. They’ve loved them as if they were their own. They shouldn’t have favourites but little Lauren has touched their hearts. And now her mother is well enough to take her back and Belle can’t bear the loss. Hence, Christmas is cancelled. So when Jim crashes his car one icy December night, after an argument about Lauren, Belle can only blame herself. Everything she loves is lost. And Belle ﬁnds herself standing on The Ha’Penny Bridge wishing she had never been born. But what happens to a Christmas wish when an angel is listening…Will Belle realise, before it’s too late, that her life is the most wonderful life of all?

Inspired by the timeless tale of beloved Christmas movie, It’s a Wonderful Life, Carmel Harrington’s next book tells the story of Belle, a young woman and foster carer from Dublin who faces the hardest decision of her life this Christmas on The Ha’Penny Bridge.  Full of Irish charm, magic, and the warmth of the festive season this is an emotional, heartwarming story that will stay with you long after you’ve reached ‘The End’.

Perfect for fans of Jodi Picoult, Cecelia Ahern, Maeve Binchy & Jojo Moyes. Carmel is the bestselling author of The Life You Left & Beyond Grace’s Rainbow, voted Romantic eBook of the Year 2013.

Carmel Harrington lives with her husband Roger and children Amelia and Nate in a small coastal village in Wexford. She credits the idyllic setting as a constant source of inspiration to her.  Her ﬁrst book, ‘Beyond Grace’s Rainbow’ was originally self-published in August 2012. Grace’s story quickly became a bestseller – fast forward 12 months and Carmel joined the prestigious HarperCollins publishing house, represented by Trace Literary Agency. Beyond Grace’s Rainbow was voted Romantic eBook of 2013 and Kindle Book of Year 2013. Her second novel ‘The Life You Left’, was published in June 2013, was also an eBook bestseller and earned Carmel the nickname, ‘Queen of Emotional Writing’. Carmel writes emotional family dramas and they share one common theme – strong characters who ﬁnd themselves in extraordinary situations. She loves to dig deep and see how they cope, as they grapple with life-changing moments.  She is a regular on Irish TV as one of the panelists on TV3’s Midday Show, as well as being interviewed on RTE1’s Today Show, TV3’s IrelandAM and TV3’s The Morning Show. She has also been interviewed on US TV – Indiana’s WNDU. A a regular guest on radio stations and a popular freelance writer. Carmel is also a popular motivational keynote speaker, at events in Ireland, UK and US.