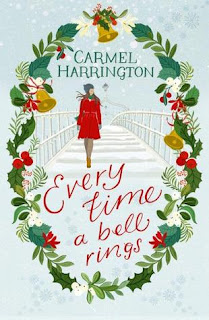 Every Time A Bell Rings
… an angel gets its wings…

Belle has taken all the Christmas decorations down. This year they won’t be celebrating. As foster parents, Belle and Jim have given many children the chance of a happier start in life. They’ve loved them as if they were their own. They shouldn’t have favourites but little Lauren has touched their hearts. And now her mother is well enough to take her back and Belle can’t bear the loss. Hence, Christmas is cancelled. So when Jim crashes his car one icy December night, after an argument about Lauren, Belle can only blame herself. Everything she loves is lost.

And Belle finds herself standing on The Ha’Penny Bridge wishing she had never been born.

Will Belle realise, before it’s too late, that her life is the most wonderful life of all?

Inspired by the timeless tale of beloved Christmas movie, It’s a Wonderful Life, Carmel Harrington’s next book tells the story of Belle, a young woman and foster carer from Dublin who faces the hardest decision of her life this Christmas on The Ha’Penny Bridge.

Full of Irish charm, magic, and the warmth of the festive season this is an
emotional, heartwarming story that will stay with you long after you’ve reached ‘The End’.

I’ve bought all 3 of Carmel’s books but so far this is the only one I have been able to get to – and what a wonderful read it is.

We meet Belle Bailey and Jim Looney when they are young children, and together in a foster home. Belle in particular had a horrible time, being passed from one home to another until she was fostered by the kindly Tess and she finally found someone that loved her.

We meet up again with Belle and Jim many years later. They have both become foster parents themselves. Their experience of being fostered has had a huge impact on their lives and they are determined to give the children they care for a life full of love and as much happiness and stability as they can for however long they are with them. The interaction between them and their foster children was lovely to see as were the highs and lows of fostering – the joy of making a difference to a child’s life but the heartbreak when its time to say goodbye.

Every Time a Bell Rings is inspired by the 1946 film ‘Its a Wonderful Life’ (a film I had never watched until a couple of years ago); the magical element to the story works so well and there were times when I was in tears. Both Belle and Jim were excellent characters – Belle had a heart full of love to give and Jim was so patient and caring. Belle has had much to cope with in her life but there were times when I felt frustration at her inability to try to put the past behind her and focus on the future.

This is both an uplifting and emotional story with a thought provoking message at its heart. Everything we do in life has an impact on others – for good or bad. No-one’s life is worthless and everybody has something valuable to give if they are given a chance.

Carmel’s writing is beautiful; she writes with warmth and humour and is a wonderful storyteller. The characters are expertly fleshed out and engaging – the larger than life Tess with her fondness for fry ups and chocolate. Bobby, the foster child who with guidance and love has made something of his life despite his early life with his birth family. The story is mainly set in Dublin and the landmarks including the Ha’Penny Bridge are so well described, I felt like a bystander, watching the story unfold.

This is a perfect read to get you in the mood for Christmas and I am sure this will be become a Christmas favourite, it will be for me – and one of those stories that you will want to go back to year after year.

In October, Carmel kindly provided a guest post for my turn on the blog tour for Every Time a Bell Rings when she talked about her favourite Christmas memory, which you can read here.

Source: My own purchased copy. At the time of writing this post, Every Time a Bell Rings can be downloaded from Amazon for £2.99 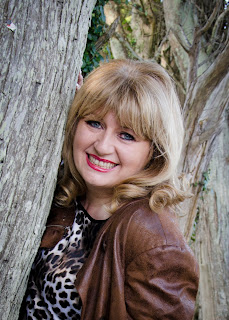 Carmel Harrington lives with her husband Roger and children Amelia and Nate in a small coastal village in Wexford. She credits the idyllic setting as a constant source of inspiration to her.  Her ﬁrst book, ‘Beyond Grace’s Rainbow’ was originally self-published in August 2012. Grace’s story quickly became a bestseller – fast forward 12 months and Carmel joined the prestigious HarperCollins publishing house, represented by Trace Literary Agency. Beyond Grace’s Rainbow was voted Romantic eBook of 2013 and Kindle Book of Year 2013. Her second novel ‘The Life You Left’, was published in June 2013, was also an eBook bestseller and earned Carmel the nickname, ‘Queen of Emotional Writing’.

Carmel writes emotional family dramas and they share one common theme – strong characters who ﬁnd themselves in extraordinary situations. She loves to dig deep and see how they cope, as they grapple with life-changing moments.  She is a regular on Irish TV as one of the panelists on TV3’s Midday Show, as well as being interviewed on RTE1’s Today Show, TV3’s IrelandAM and TV3’s The Morning Show. She has also been interviewed on US TV – Indiana’s WNDU. A a regular guest on radio stations and a popular freelance writer. Carmel is also a popular motivational keynote speaker, at events in Ireland, UK and US.