I Know Who Did It – Steve Mosby 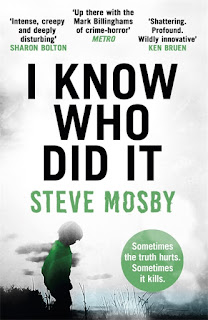 The hardest crimes to acknowledge are your own…

Charlie Matheson died two years ago in a car accident. So how is a woman bearing a startling resemblance to her claiming to be back from the dead? Detective Mark Nelson is called in to investigate and hear her terrifying account of what she’s been through in the afterlife.

Every year Detective David Groves receives a birthday card for his son…even though he buried him years ago. His son’s murder took everything from him, apart from his belief in the law, even though the killers were never found. This year, though, the card bears a different message: I know who did it.

Uncovering the facts will lead them all on a dark journey, where they must face their own wrongs as well as those done to those they love. It will take them to a place where justice is a game, and punishments are severe. Nelson and Groves know the answers lie with the kind of people you want to turn and run from. But if they’re to get to the truth, first they’ll have to go through hell…

I hadn’t read anything by Steve Mosby before but after this killer read, I certainly want to read more now, in particular, a previous novel, The 50/50 Killer, which is referred to in this book. I didn’t feel that I had missed out by not reading that one first as I Know Who Did It can easily be read as a standalone but the 50/50 story sounds so terrifyingly intriguing and menacing and features some of the same characters.

Anyway, back to I Know Who Did It. Two detectives, Mark Nelson and David Groves are investigating different cases – one involving a woman who claims to have returned from the dead following a fatal car crash two years before and the other a murdered child – the child of David Groves. With complex and sophisticated plotting, Steve Mosby has created a thrilling crime story that I raced through in just a day and a half. Whilst this is not a high speed action thriller, there is plenty of pace and tension with focus on the characters. Both Nelson and Groves have their own back story with issues and grief to deal with and their flaws and vulnerabilities are laid bare. The storyline is dark and disturbing. Cruel manipulation along with the concept of Heaven and Hell are explored here, and there certainly are some twisted and macabre minds at work.

To give a more rounded feel to the story, the chapters are told from the POV of different characters, however they are all clearly marked and there is no confusion as to whose voice is narrating.

The twist in this story was just incredible and made me rethink all that I had read. If you’re looking for something a little different in the crime fiction genre then this is a fabulous read and Steve Mosby is now on my list of authors to watch out for.

Shortly after being approved for this title on Netgalley I received a paperback copy via the Goodreads First Reads programme. My thanks to the publisher for the opportunity to read and review. 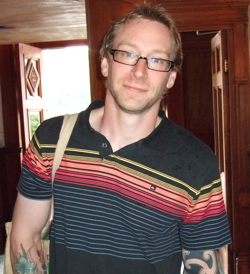 Steve Mosby lives and works in Leeds. He is the author of The Third Person, The Cutting Crew, The 50/50 Killer, Cry For Help, Still Bleeding, Black Flowers, Dark Room and The Nightmare Place. His novels have been translated widely and longlisted for the Theakstons Crime Novel of the Year Award and CWA Dagger in the Library.