1976: Peggy Hillcoat is eight. She spends her summer camping with her father, playing her beloved record of The Railway Children and listening to her mother’s grand piano, but her pretty life is about to change.


Her survivalist father, who has been stockpiling provisions for the end which is surely coming soon, takes her from London to a cabin in a remote European forest. There he tells Peggy the rest of the world has disappeared.


Her life is reduced to a piano which makes music but no sound, a forest where all that grows is a means of survival. And a tiny wooden hut that is Everything.

‘From now on, Punzel, we’re going to live by the sun and the seasons’. He picked me up and spun me around, laughing.  ‘Our days will be endless’.


When Peggy Hillcoat is 8 years old, she is taken away from her London home by her father James.  Her German mother Ute is a famous pianist and is away on tour at the time.   James is a survivalist, and has been stockpiling in their basement, tinned food and items necessary to prepare for survival in the event of an attack.  Peggy is used to practising packing her rucksack with a few minutes notice and camping out in the garden seemed fun but she is about to find out just how tough it really is to surivve.

This is a beautifully written and descriptive story of how a young girl survives in a remote wooden hut with just her father and a few basic possessions.   It has quite a slow pace throughout but the vivid descriptions of the landscape and how they live in the tiny dilapidated ‘die Hütte’ for all those years are so evocative. It is a also a novel of extreme cruelty. James tells Peggy that her mother is dead and that they are the only two people left alive. Over the following years, Peggy has to grow up without any other human interaction or guidance and and as her father’s mental state fluctuates, she begins to realise that her may not be all that he seems.

Peggy’s young narrative voice has a naivety and a childlike quality but she is also capable of insight beyond her years. Her father makes her a silent piano so that she can practice ‘La Campanella’, a piece of music which has special meaning for James and Ute, and in between checking the traps for food and collecting water, this forms the basis of her daily life.   There were times when my heart broke for her at the hardships she had to endure.

I’m not giving any spoilers by saying that Peggy returns home, as this is where the story begins in 1985.  She is now 17 and has to learn to live with her family all over again.  Why did her father take her away in such a cruel manner and and how did she find her way home – these were questions that I couldn’t wait to find the answers to.

Before I started this, I wasn’t sure if this was going to be my type of read, however it is an original and enthralling debut novel with an ending that I found surprising and shocking in equal measures.  It is one of those books that will keep you thinking back, long after the final page. 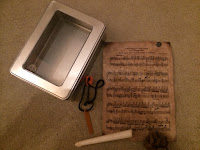 My thanks to the publisher for the review copy.

When my ARC arrived, these were the items accompanying it – very intriguing, and once I started reading, the relevance became clear. 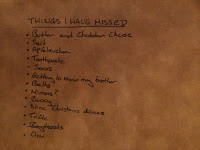 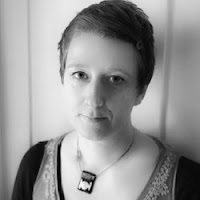 Claire Fuller is a writer of short stories and novels and an artist. Her debut novel is Our Endless Numbered Days.