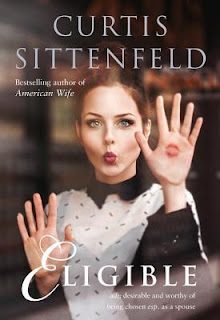 Published by The Borough Press

‘Sheer joy…Giddy and glam and a hearty update of Pride and Prejudice’ Jessie Burton, author of The Miniaturist.


From the bestselling author of Prep, American Wife and Sisterland comes this brilliant retelling of Austen’s classic set in modern day Cincinnati. The Bennet sisters have been summoned from New York City. Liz and Jane are good daughters. They’ve come home to suburban Cincinnati to get their mother to stop feeding their father steak as he recovers from heart surgery, to tidy up the crumbling Tudor-style family home, and to wrench their three sisters from their various states of arrested development. Once they are under the same roof, old patterns return fast. Soon enough they are being berated for their single status, their only respite the early morning runs they escape on together. For two successful women in their late thirties, it really is too much to bear. That is, until the Lucas family’s BBQ throws them in the way of some eligible single men …Chip Bingley is not only a charming doctor, he’s a reality TV star too. But Chip’s friend, haughty neurosurgeon Fitzwilliam Darcy, can barely stomach Cincinnati or its inhabitants. Jane is entranced by Chip; Liz, sceptical of Darcy. As Liz is consumed by her father’s mounting medical bills, her wayward sisters and Cousin Willie trying to stick his tongue down her throat, it isn’t only the local chilli that will leave a bad aftertaste. But where there are hearts that beat and mothers that push, the mysterious course of love will resolve itself in the most entertaining and unlikely of ways. And from the hand of Curtis Sittenfeld, Pride & Prejudice is catapulted into our modern world singing out with hilarity and truth.

I have a confession to make.  Although I have several versions of the book on my shelves and have dipped in and out over the years, I have never actually read Pride & Prejudice from start to finish and my knowledge of the story merely comes from avidly watching the TV adaptation many years ago with Colin Firth coming out of the water…….but that doesn’t matter a jot when it comes to reading Eligible.   If you’ve never read P&P, nor seen the TV series, then Eligible is still a joy to read.

Having read and very much enjoyed Curtis Sittenfeld’s ‘American Wife’ a few years ago, I knew that I was in safe hands with this author.

This is a very funny and contemporary re-telling of the Bennet family, set in Cincinnati.  Mr Bennet (whose witty one liners and wry observations I just adored) despairs of his girls ever leaving home.  Mrs Bennet, a social climber of the highest order, is desperate for at least one of her girls to marry well – social standing and appearances are everything to her and her apparent disregard for her husband’s health or happiness is quite remarkable.

When the two eldest Bennet daughters, Jane and Lizzie return home to Cincinnati to help look after their father following a health scare, the differences between the siblings are highlighted. The three youngest Bennet girls still live at home and show no inclination to move out or get a job.  Jane is 39, Lizzie 38, Mary is 30, Kitty 26, and the youngest is Lydia at 23.  With the exception of Jane and Lizzie, there is not much sisterly love between them and Lydia is quite obnoxious most of the time.

Following local ER doctor Chip Bingley’s appearance on a reality TV series, ‘Eligible’, it stands to reason that many young women’s eyes are upon him. Charming and good looking, and much to Mrs Bennet’s delight, he sets his sights on Jane. Jane however, has other priorities on her mind and despite his Harvard education and medical degree Chip Bingley is a flake.

When Lizzie first sets eyes on neurosurgeon Fitzwilliam Darcy, things do not go well – disdain on his part and dislike on hers make for difficult encounters and it seems impossible that there could ever be a happy ever after for them.

There are characters here in different reincarnations that many will still recognise from Pride & Prejudice – the Lucas’, Mr Collins (here Cousin Willie, a 30 year old millionaire technology whizzkid – lots of money but questionable social skills), Kathy de Bourgh, an elderly famous feminist; and of course the Bingleys and Darcy.

I don’t want to give away the story, you need to read this for yourself, but I loved this book. I loved the wit, the dry humour and the sharpness of the dialogue between the characters.  Lizzie was a fabulous character – I didn’t share her enamourment with her long time love Jasper (Wick), but despite this lapse of judgement on her part, I admired her sparkiness and determination.  She discovers that following her father’s health issues and resultant hospital bills that her parents are virtually bankrupt and is determined to get them to live within their means – with Mrs Bennet being a compulsive shopper and hoarder and Mr Bennet burying his head in the sand, no easy task.

The machinations of the world of reality TV are exposed here – think of a much tackier version of the UK’s ‘Big Brother’ and you have some idea of the concept of the show involving Chip Bingley which gives rise to the title of the book.

And what of Lizzie and Darcy – do they get their happy ending? You will have to read the book and find out.

I can’t recommend this book enough.  It’s clever, extremely entertaining and relevant to modern times but still retains some of the essence of the original characters.  It’s short chapters were just so addictive.  Curtis Sittenfeld writes so well and despite my proof copy being in excess of 500 pages there wasn’t one page that I didn’t enjoy.

I received my paperback copy via the Amazon Vine review programme.

Curtis Sittenfeld is the author of the new novel Eligible, a modern retelling of Pride and Prejudice (due out April 2016) as well as the bestselling novels Sisterland, American Wife, Prep, and The Man of My Dreams, which have been translated into twenty-five languages. Curtis’s writing has appeared in many publications, including The Atlantic, The New York Times, Vanity Fair,Time, Slate, Glamour, and on public radio’s This American Life. A graduate of Stanford University and the Iowa Writers’ Workshop, she currently lives in St. Louis, MO.