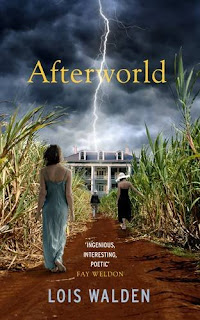 Meet four generations of the Duvalier family, for whom sugar cane is both their blessing and their curse. From patriarch Carter, who perishes before the novel begins after being hit in the head by an exploding manhole cover, and his indomitable holy-roller wife Lily, to their dysfunctional sons Winston and Steven, and their equally screwed-up grandchildren, the Duvaliers, both dead and alive, would do anything to keep their secrets hidden.

With their world blown apart by the winds of Katrina and consumed by their greed and lust – and with Afterword exercising an unearthly control over them all – their story creates a novel of unimaginable beauty, dark humour and terrible tragedy.

Sugar made them and Sugar almost destroyed them.

From the moment that we’re told at the beginning of the book that the father of the family, Carter Duvalier, died whilst being hit on the head by an exploding manhole cover, you know that this is not going to be a run of the mill read and I have to admit that when I first started reading this, it was so far out of my comfort zone that I was contemplating whether to continue. I was however also intrigued and decided to continue to see where the story was going – or if indeed there was a story.

The Duvaliers own a sugar plantation, passed down the family chain from Carter’s own father, William, and are on the whole a depraved and dysfunctional family. They have for generations been consumed by lust and greed and there is a line in the book which sums them up perfectly “…a family rife with alcoholics, depressives, degenerates and sexual deviates….”

The Afterworld of the title is a place after death where some of the characters narrate from. In the first part of the book, each chapter is told by a different member of the family, whether alive or dead, giving insight into how they really feel about each other. Afterworld itself, also has a voice, as does Sugar and Swamp.

Being a multi-generational story, there are many characters involved but there is a family tree at the beginning which I had to keep referring to. The main story takes place just before Hurricane Katrina hits and the destruction caused by both Katrina and the Duvaliers’ own actions leaves the family struggling to come to terms with events.

Even after I had finished reading, I was still trying to make sense of the story. Through the characters and events you do get a real feeling for the deep south where much of the story takes place. There are moments of dark humour and tragedy but also hope – that people can learn from their mistakes and forgive.

The writing is very clever but in all honesty I think my tastes are too mainstream to fully appreciate it and do justice to a review but if you like quirky, unusual and original reads then this may well be the book for you.

My thanks to Colin of www.bookshaped.com for the review copy.