Someone to Watch Over Me – Madeleine Reiss 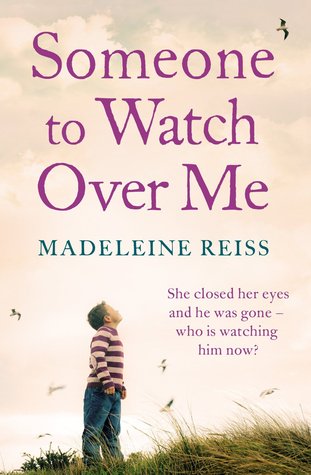 A haunting and compelling debut novel that will appeal to readers who loved Sister by Rosamund Lupton and Before I Go to Sleep by SJ Watson.

She closed her eyes and he was gone – who is watching him now?

When Carrie’s five-year old son, Charlie, disappeared on a Norfolk beach, her world was destroyed. Now, three years on, she is persuaded by her mother to visit a local medium. Initially sceptical, Carrie is blown away when he appears to reveal something about Charlie’s disappearance; something that nobody could ever have known except herself.

Single mum, Molly, is worried about her young son, Max, who has been having more of his little ‘accidents’ at school and has recently starting talking again to his imaginary friend.

Molly knows that Max’s problems stem from his very real anxieties about his father – a violent and unstable man – who they are now in hiding from.

Little do the women know that their worlds are about to converge – and both of them will have to face the thing they fear the most. But could the truth destroy them?

I was completely gripped by this story from the start. We know early on that Carrie and Damian’s young son Charlie has vanished from a Norfolk beach – what we don’t know is why and how.

The story then goes forward by 3 years and life has slowly moved forward for both Carrie and Damian. Sadly their marriage didn’t survive Charlie’s disappearance and therefore currently single, Carrie and her old friend Jen, are preparing to open their gift shop “Trove”. Carrie is thankful to have the shop to keep her busy. She is still grieving for the loss of her son and the guilt over the events of that day still holds firm as she has never forgiven herself for briefly falling asleep that day on the beach when Charlie disappeared.

Running along Carrie’s story is a separate strand concerning Molly and her young son Max. The connection between the two women is that Molly and Max were on the beach that very same day and Charlie played with Max for a while. The only time that Carrie and Molly met was when Carrie was frantically searching the beach looking for Charlie. However the lives of the two women are about to become entwined in a deadly manner that nobody could foresee.

Not only does this story deal with the devastation of the loss of a child but also with such issues as domestic abuse and violence. The story has a supernatural element and depending on your own individual views, you may have to suspend belief slightly at the turn that the book takes however this does nothing to diminish the suspense and tension throughout the pages.

The characterisation is excellent. Carrie’s feelings of guilt and grief are so realistic and we see her conflicting emotions as she receives possible news of Charlie and the ensuing consequences. Her love life becomes quite complicated as she slowly allows herself to start to feel again after having shut down for so long.

Molly and, in particular, her son Max were both convincing characters and my heart broke at times for Max. Molly’s desperate attempts to protect her son were almost too painful to read. Max is a lonely child and when he keeps referring to his friend Charlie, his voice is dismissed as that of a young child having an imaginary friend.

I thought I knew where the story was going, especially when Jen’s new boyfriend suddenly appeared however I was proved wrong. I’m still not quite sure why he was such a big part of the story, other than to provide a love interest for Jen.

There were some parts of the book that were lighter and verging on comedy – especially the scenes with Carrie’s mother, the characters around the shop and Carrie’s musical neighbours! However the overall tone was that of a thriller and it certainly had me turning the pages.

This debut novel gets top marks from me and I would love to read more by Madeleine Reiss.

Madeleine Reiss was born in Athens. She worked for some years in an agency for street performers and comedians and then as a journalist and publicist. She has two sons and lives in Cambridge with her husband and her younger son. Someone To Watch Over Me is her first novel.

1 thought on “Someone to Watch Over Me – Madeleine Reiss”