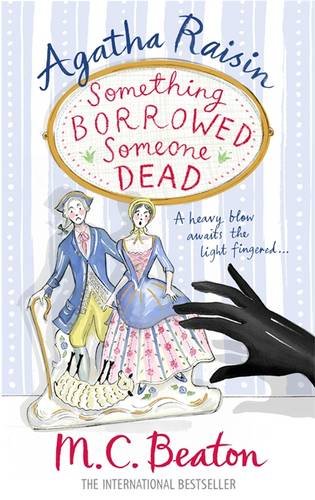 
Incomer Gloria French is at first welcomed in the Cotswold village of Piddlebury. She seems like a do-gooder par excellence, raising funds for the church and caring for the elderly. But she has a bad habit of borrowing things and not giving them back, so when she is discovered dead, poisoned by a bottle of elderberry wine, folk in the village don’t mourn her passing too intently.

Parish councillor Jerry Tarrant hires Agatha Raisin to track down the murderer. But the village is creepy and secretive and the residents don’t seem to want Agatha to find who the murderer is, and Agatha’s investigations are hampered by the emotional upset of finding her ex, James Lacey, has fallen in love with young detective Toni Gilmour.

And now the murderer is targeting Agatha!

I have to admit that the Agatha Raisin series is somewhat of a guilty pleasure. Over the years I’ve read all the books from the first one, The Quiche of Death and this is now book 24. They are completely over the top in terms of characters and plot lines but I just have to keep reading the series and have become surprisingly addicted to the grumpy private detective.

In Agatha’s latest adventure, the body count doesn’t seem to be quite as high as normal – in many of the stories, the Cotswold countryside is normally littered with bodies. Agatha is still like a bull in a china shop in her manner although, in this story, she seems a little more subdued and dare I say it, a teeny bit more tactful, and less interfering, particularly where Toni is concerned.

One of the things I like about this series is the Cotswold setting. I adore the Cotswolds and its somewhere I would love to live, although in Agatha Raisin’s world, it’s rather a dangerous place. The latest adventure is set in the village of Piddlebury, with the murder victim being Gloria French. Gloria is fairly new to the village and seemingly is a pillar of the community – she helps by raising funds for church repairs, reads to the elderly and does their shopping. However she has a fault – she has a habit of ‘borrowing’ things – anything from flour to a valuable antique chest of drawers and then refuses to return them. It’s inevitable that she is going to gain some enemies – and any one of the good folk of Piddlebury could be a killer.

When Agatha is asked to investigate and find the killer, she adopts her usual bullish style and gets people’s backs up around the village – however little does she know that she is in the killer’s sights! She has her work cut out here as the villagers close ranks and try to chase away outsiders interfering in their affairs.

Agatha Raisin is never going to be a cuddly Miss Marple character. She’s bossy, prone to extreme jealousy, is extremely vain, has an acid tongue and is addicted to publicity, however this is part of her attraction. The usual cast of characters appear including Sir Charles Fraith – Agatha’s on and off lover/friend, her ex-husband James Lacey, and the wise and kind Mrs Bloxby, the vicar’s wife. Toni Gilmour, Agatha’s young colleague, features more heavily in this book however even her character seems rather lacklustre in comparison to previous stories. Of course there always has to be a love interest for Agatha to obsess over and, basically, stalk, and this time it’s the turn of a fellow guest at the Inn in Piddlebury where Agatha is staying. Unhappily for Agatha, her interest is not reciprocated!

All the stories follow the same formula and the ending is of course predictable. The author does seem to think of increasingly bizarre ways to kill people off – poisonous elderberry wine being the latest weapon of choice. I found this story a little bit darker and the villagers creepier than usual, with blackmail and talk of witchcraft.

If you’re looking for a serious crime fiction read, then you may be disappointed. If however you want a quick read that’s easy and uncomplicated then this series is ideal.