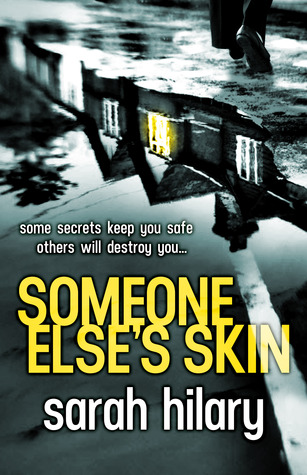 Some secrets keep you safe, others will destroy you…

Detective Inspector Marnie Rome. Dependable; fierce; brilliant at her job; a rising star in the ranks. Everyone knows how Marnie fought to come back from a tragic event in her past but very few know what is going on below the surface. Because Marnie has secrets she won’t share with anyone.

But then so does everyone. Certainly those in the women’s shelter Marnie and Detective Sergeant Noah Jake visit on that fateful day. The day when they arrive to interview a resident, only to find one of the women’s husbands, who shouldn’t have been there, lying stabbed on the floor.

As Marnie and Noah investigate the crime further, events begin to spiral and the violence escalates. Everyone is keeping secrets, some for survival and some, they suspect, to disguise who they really are under their skin.

Now, if Marnie is going to find the truth she will have to face her own demons head on. Because the time has come for secrets to be revealed…

When DI Marnie Rome and her colleague, DS Noah Jake, are asked to attend a woman’s refuge to try and persuade a victim of domestic abuse to give evidence against her brother – the main suspect in another vicious crime, what they originally believed would be a routine visit turns into something far more complex. They arrive at the scene to find the husband of one of the women lying on the floor, the apparent victim of a stabbing. During their investigation for the truth, they have to work their way through a web of deceit and secrets where nothing can be taken at face value.

This is Sarah Hilary’s debut crime novel, which, after a bit of an unsure start for me, ultimately turned into an excellent read. I must admit it did take me a while to get into the story. For one thing, the text was sometimes a little too descriptive and I was struggling to understand the meaning and secondly, I didn’t take to the character of Marnie straight away and it took me a while to care about her. However, it was well worth sticking with it as I was rewarded by a dark, gripping story with interesting and well-drawn characters that kept me turning the pages into the early hours.

Marnie Rome is a complicated character with a tragic back story. Her own history is referred to throughout the book and is made to feel an integral part of the novel. She has her own secrets and demons to deal with but far from being defined by the events of the past, they have made her stronger with a determination to succeed. Her sidekick, Noah Jake has to deal with prejudice and discrimination from others, including some of his colleagues, however the two of them, both damaged in their own way, work well together and this is a partnership that I would love to see developed further in future books.

The story is not a pretty one – it is primarily about domestic abuse and control and the desire to inflict pain and yes there is violence, albeit not gratuitous. Sarah Hilary has created a compelling and wholly believable tale about the darker side of human nature and there are plenty of twists and turns throughout to make this a thriller that you will not want to put down. I shall certainly be looking out for the next Marnie Rome story.

Sarah Hilary lives in Bath with her husband and daughter, where she writes quirky copy for a well-loved travel publisher. She’s also worked as a bookseller, and with the Royal Navy. An award-winning short story writer, Sarah won the Cheshire Prize for Literature in 2012. NO OTHER DARKNESS is her second novel, after SOMEONE ELSE’S SKIN which is being published in 2014