A Hundred Pieces of Me – Lucy Dillon 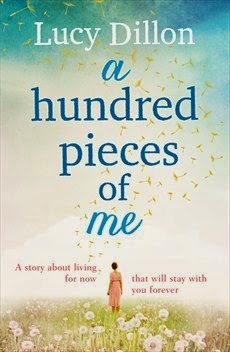 Published on 27 February 2014 by Hodder & Stoughton

Letters from the only man she’s ever loved.


A keepsake of the father she never knew.


Or just a beautiful glass vase that catches the light, even on a grey day.

If you had the chance to make a fresh start, what would you keep from your old life?  What would you give away?

Gina Bellamy is starting again, after a difficult few years she’d rather forget.  But the belongings she’s treasured for so long just don’t seem to fit who she is now.

So Gina makes a resolution. She’ll keep just a hundred special items – the rest can go.

But that means coming to terms with her past and learning to embrace the future, whatever it might bring….

I feel quite ashamed to admit that I have a few of Lucy’s books on my bookshelves still waiting to be read.  However after this lovely read I shall hunt them out and give them the attention they deserve.

Gina Bellamy has been through an awful lot in her life, including the death of her father when she was only a child, surviving a life threatening illness and now a marriage breakdown.  Newly single and having to move into a much smaller flat, she is horrified at the huge amount of boxes of possessions she has and decides to drastically downsize by keeping only 100 items which are precious to her.  Throughout the story we are given insight into Gina’s memories by way of flashback, including those of her childhood and first love – right up to her marriage.  This is a very clever way of including Gina’s back story whilst keeping the narrative flowing.  There is no particular order to these chapters but it doesn’t matter at all as I soon became immersed in Gina’s life and her memories.

Gina was wonderfully well drawn with depth and warmth and I took to her immediately.  She was surrounded by a supporting cast of very strong and extremely likeable characters, including Nick the co-owner of the house that she was helping to restore, Rachel who ran the charity shop opposite her flat and, in particular, Naomi who was everything that a best friend should be.  One of the aspects of this story that I found particularly moving was the affirmation of the value and importance of friendship.

Lucy Dillon has written a story that is both heartwarming and thought provoking.  With each box of possessions that Gina clears, she has to face the regret and heartbreak of past events – all are memories which she must deal with in order to be able to move forward with her life.  Buzz, the abandoned greyhound was a wonderful addition to the story and I fell in love with him straight away!  There was just the lightest touch of romance which helped to make this a moving but uplifting read and one that I highly recommend.

As a bit of a hoarder myself, I envied Gina’s willpower to dispose of unnecessary possessions – I think I should take a leaf out of her book and get myself some boxes!

My thanks to Veronique at Hodder & Stoughton for the paperback copy to review.

Lucy Dillon was born in Cumbria, worked for a while in publishing in London and now lives in Herefordshire with her two basset hounds.  She has written five novels for Hodder & Stoughton, all set in the fictional Midlands town of Longhampton.  A Hundred Pieces of Me is Lucy’s fifth novel.

Lucy won the Romantic Novelists’ Association Novel of the Year Award in 2010 for Lost Dogs and Lonely Hearts.

2 thoughts on “A Hundred Pieces of Me – Lucy Dillon”

The Bird in the Bamboo Cage – Hazel Gaynor

The Girl You Forgot – Giselle Green